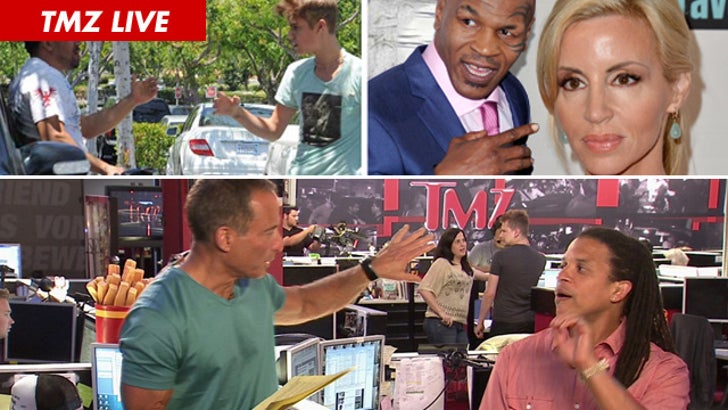 Before Justin Bieber went toe-to-toe with a photographer -- sparking a police investigation -- he trained with "Iron" Mike Tyson! Wondering how they ended up together? Well, we got Tyson on the phone ... and you won't believe his excuse for kicking it with Biebs.
Plus, Camille Grammer goes to war with her bf's baby mama! It's all over secret recordings, and it sounds to us like Cammy's got a case.
Also, Jim Paratore -- the man who, literally, made TMZ possible has died ... and we're sharing our memories.

(0:00) Justin Bieber is used to dealing with the paparazzi, but how will he handle them now that he's practicing punches with Mike Tyson?

(7:50) Lindsay Lohan owes one Las Vegas tanning salon a whole heap of cash, and they're HEATED!

(15:51) Fans went GAGA over Madonna in Israel last night... but did her performance include a jab at another HUGE star?

(19:33) Phillip Phillips has needed kidney surgery since 'American Idol' STARTED... and it looks like he'll have to wait a little longer.

(25:20) One of Kim Kardashian's handlers ends up in a fiery exchange with airport security... and we aren't exactly sure why.

(29:18) Move over, Mel-- Camille Grammer is the latest celeb with a secretly recorded rant... but was she tapped illegally?

(32:19) Another day, another hit-and-run allegation for Amanda Bynes.