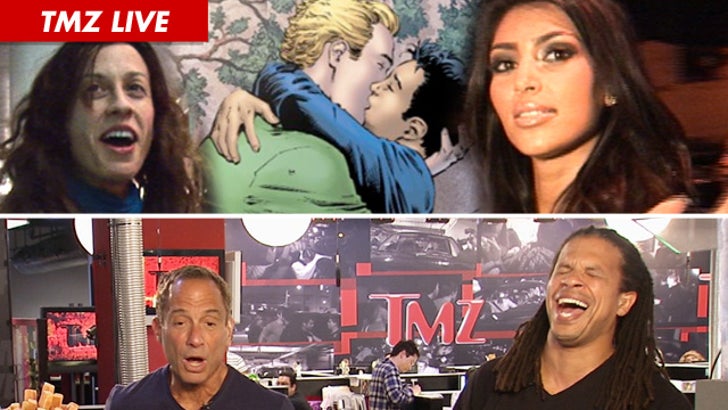 Alanis Morissette says she'll breast-feed her son until he's six years old if that's what he wants -- so we talked to Dr. Phil to find out it this kinda thing screws with a kid's head..
Plus, the Green Lantern is gay -- well, ONE Green Lantern is gay. Turns out there are 7200 GLs! And one of 'em works at TMZ?? You gotta see what went down during this discussion.
And, Brandon Jenner gets married in Hawaii -- and not even one Kardashian sister shows up. Could there be a rift in the royal family of reality TV?

(0:00) Alanis Morissette says she'll breast-feed her kid for as many years as it takes -- we talk to Dr. Phil on the phone about the sexual implications of her feeding habits ... and his answers are hilarious.
(7:42) Justin Bieber knocks himself unconscious -- then calls us to talk about it! And in his weakened state ... we get him to answer a question that may tick off every woman in Paris.
(10:22) "Jersey Shore" is back ... and sober! This is going to be borrrrrring.
(16:00) Breaking news -- Matthew Fox punished for driving drunk.
(18:51) Lamar Odom says Kris Jenner has nothing to do with his basketball career ... but something he said pits Harvey and Charles in a gnarly argument.
(21:10) The Green Lantern in gay! Sounds simple ... but it's far from that. Our in-house comic book aficionado attempts to explain.
(23:50) Incredible -- is one of our employees the gay Green Lantern ... sure looks like it!
(26:00) The Hollywood Reporter's latest cover -- whitewashed! Why aren't there ANY non-white actresses on it?
(30:04) The OTHER Jenner -- Brandon -- gets married ... any not one Kardashian sister showed up to see it. Is there a rift in the family?
(34:10) Michael Jackson's death house may finally get sold.
(36:11) A teacher at Malibu High School allegedly slaps a student around ... just like in the scene from "Bridesmaids."
(42:03) Brian Banks -- the guy who was unjustly imprisoned for a rape he didn't commit -- has been released ... and now NFL teams are giving him the chance that was taken away from him years ago.
(43:15) We take your calls!