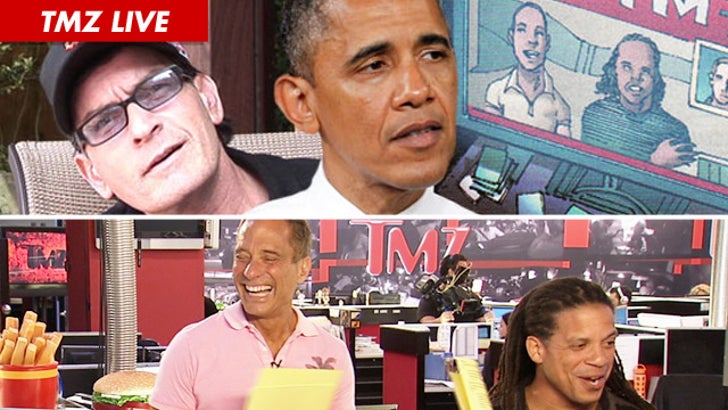 TMZ Live
Charlie Sheen goes mental on an usher outside the L.A. Kings game -- and we have video of the expletive-filled tirade ... and exclusive details on what set off the Warlock.

Plus, you gotta see this -- President Obama makes an oral sex joke about the First Lady at an LGBT fundraiser ... and the look on his face is absolutely priceless. Was it a mistake ... or is Obama's comedic time that good?
Also, TMZ Live is immortalized in the new Justice League comic book -- but Harvey and Charles have issues ... with the way they were drawn.

(0:00) Charlie Sheen goes mental on a security guard at the Staples Center -- and we have video of his epic blowup ... as well as exclusive detail on what set him off.
(5:35) "American Idol" winner Phillip Phillips FINALLY has surgery to remove his kidney stones.
(9:45) The Olympic torch runs by the studio! (Major retraction to this statement to come later in the show) (10:55) More evidence that the stuttering soldier on "America's Got Talent" could be a total fraud. Plus, we know what's going to happen to him down the road on the show.
(17:40) Remember the rumor about Mel Gibson wanting to murder Harvey and bury him in the desert? It's come up again.
(21:00) The first pair of Kanye West's Air Yeezy 2 is selling for $90k!!! No need to point out how ridiculous this is. But yeah, it's totally ridiculous.
(24:01) You've GOT TO WATCH THIS -- President Obama seems to make an accidental oral sex joke ... and the look on his face is beyond priceless.
(30:10) Mark Paul Gosselaar joins a long line of celebs who rip the show that made them famous.
(33:00) The Situation -- back to being ripped after rehab ... but still not the Situation of old.
(35:30) The retraction we promised ... the torch belongs to the Special Olympics, not the Olympics. All apologies for the confusion.
(37:00) Whitney Houston's daughter off the hook after being caught gambling in Las Vegas while underage.
(38:10) TMZ Live is featured in the new issue of the Justice League comic book -- you gotta feast your eyes on the way they drew Harvey and Charles!
(40:25) We take your calls!