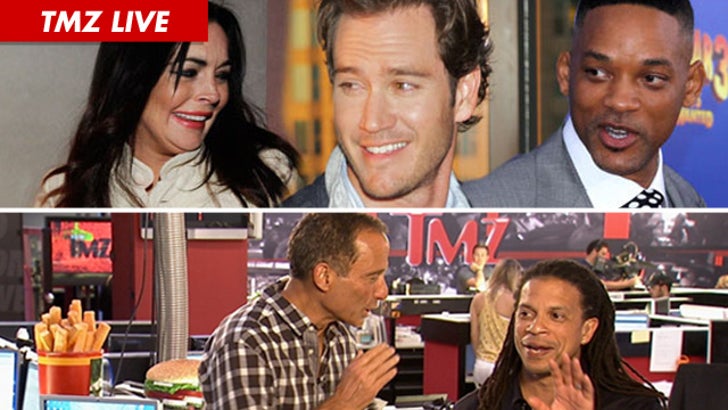 Lindsay Lohan's umpteenth car accident landed her in the hospital -- she says it wasn't her fault -- but our photos from the scene of the crash (and her track record) might tell a different story.
Plus, Mark-Paul Gosselaar from "Saved by the Bell" calls in to set the record straight -- he doesn't hate the show that made him famous ... and he says he can prove it. And as long as we've got him ... MPG judges Shevonne's performance of a classic "SBTB" scene.
And, Will Smith remixes his classic "Summertime" -- so we got DJ Jazzy Jeff and Mick Boogie on the phone to reveal how they got Big Willie back on the mic. You won't believe how many takes it took him to down the perfect track.

(0:00) Breaking news! Lindsay Lohan was just involved in a NASTY car accident -- totaling her Porsche ... and have photos of the damage. So who was at fault?
(8:02) Kris Humphries is taking extra steps to make sure his new hookup doesn't blab her mouth about what's going on behind closed doors ... and Harvey knows why he's so paranoid about it.
(12:12) Ex-Miss Pennsylvania isn't backing down from her claims that the Miss USA pageant was rigged -- but one of the pageant's judges -- Marilu Henner -- calls in to explain why she's full of it.
(17:30) Mark-Paul Gosselaar calls in to set the record straight -- he's got no problem with his "Saved by the Bell" roots ... and he isn't afraid to show it. Plus ... Shevonne re-enacts her favorite scene from the show.
(24:40) Breaking news -- Kim Kardashian just bought Kanye West the sickest ride ever for his birthday.
(25:40) Vivica A. Fox says President Barack Obama smells amazing -- we have a theory about why he wears cologne.
(28:00) DJ Jazzy Jeff and Mick Boogie call in to talk about Will Smith's new remix of "Summertime." You won't believe how many takes it took Big Willie to nail it down.
(33:01) This is just crazy -- a model sitting next to married actor Brian Presley live-tweets his alleged pick-up lines ... but he denies the whole thing went down.
(38:10) WARNING -- this segments is about a new vagina bleaching system ... and quickly gets way out of hand.
(40:25) We take your calls!