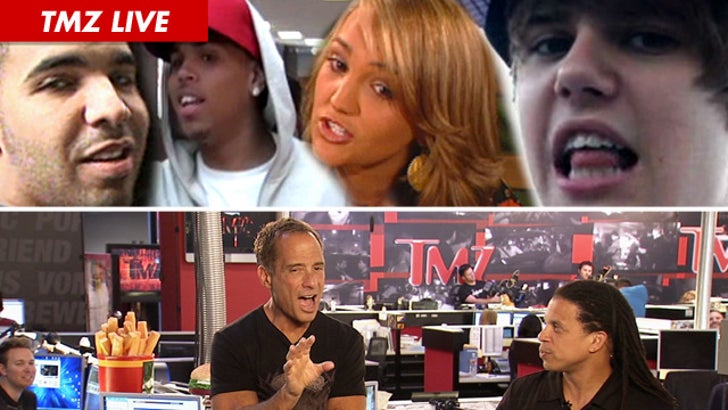 Drake and Chris Brown's nightclub brawl left several innocent people wounded -- including an NBA superstar -- and with a full-fledged NYPD investigation going on ... who's talking, and will they name names? Y'know what they say about snitches ...

Plus, Britney Spears' little sis Jamie Lynn sounds like she's on the verge of a comeback -- and Justin Bieber inspires the Arizona Diamondbacks?? All-Star pitcher J.J. Putz calls in to talk about his prized possession ... a signed Bieber collector card!

(0:00) More drama with Lindsay Lohan -- an ambulance was called to her hotel room after she wouldn't wake up ... but we're told she was just exhausted from really long hours shooting "Liz and Dick."
(3:00) We have a bunch more details about the Chris Brown/Drake brawl -- including whose crew is responsible for bashing Chris' bodyguard, the injuries Tony Parker suffered, and who's snitching on who.
(12:00) Breaking news -- David Arquette and Courteney Cox may end up having he best divorce in Hollywood ... they were spotted out together today for Courtney's birthday.
(13:30) Sarah Jessica Parker's $40k dinner for President Obama -- someone only stayed for 20 minutes ... which comes to about $2k per minute! Sounds ridiculous ... but it may have been the best way to do it.
(16:40) Britney Spears little sister Jamie Lynn performs onstage live -- and actually sings ... and kills it! Is she about to have a major comeback?
(20:30) Arizona Diamondbacks pitcher J.J. Putz finds a rare, signed Justin Bieber trading car -- you won't believe the story behind it ... as well as how the D-backs use Justin's music to get pumped up.
(23:30) Gisele raked in $45 mil this year ... by fare the most successful model on the planet.
(26:15) "Glass House" is NOT a rip-off of "Big Brother" -- and we'll tell you why.
(27:30) Candy Spelling is glad she moved out of one of the biggest houses ever built -- and into a far more modest, 18,000 sq. ft. condo.
(32:55) Greatest idea ever? Pizza vending machines are a real thing now.
(34:30) Some guys dress up like Batman to catch alleged pedophiles -- and it just might have worked! Lucky for you ... we have video of faux-Batman's good deeds in action.
(39:03) Time to rip into one of our producers -- who made the mistake of calling Rza (pronounced Rizzah) from the Wu-Tang Clan .... R. Z. A. It's about to get nasty!
(40:25) We take your calls!