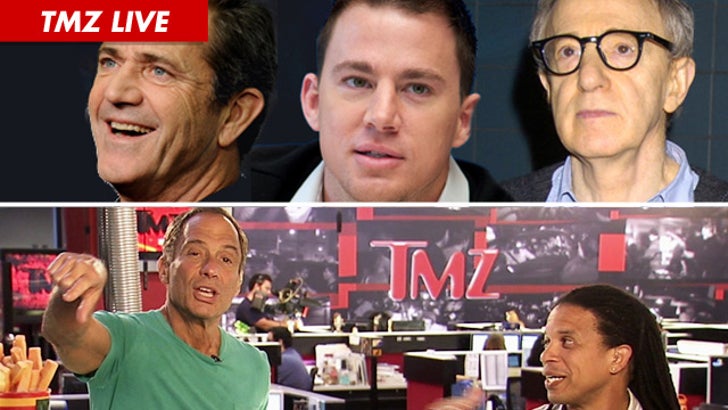 Mel Gibson proved he is back in party mode by bumping and grinding with Maria Menounos -- but be honest ... with his infamous temper, would you wanna rage with Mel?
Plus, did Channing Tatum rip-off some raunchy moves for his new movie? Male stripper Thomas "Awesome" Austin calls in to demand a little cred for teaching Channing the "hotseat." What's that? Good luck getting an answer out of Mr. Awesome!

Also, Woody Allen's son drops a Twitter bomb on him for Father's Day, and it's hysterical -- but will Woody's relationship with Soon-Yi ever be anything less than creepy?

(0:00) Mel Gibson ... party animal? He was photographed dirty dancing with birthday girl Maria Menounos this weekend -- so has he finally decided to start living his life again after years of bad press?
(4:40) More details, more backlash, and more victims emerge from the Drake/Chris Brown brawl. Plus, Drake vaguely rants about the fight during his last concert ... and we have video of it.
(10:00) A wannabe Abercrombie and Fitch model files the craziest lawsuit -- claiming he was asked to get naked and masterbate during a shoot ... AND THEN DID IT. Max says this happens all the time in the world of modeling.
(13:50) Rodney King died this weekend when he allegedly drowned in his pool -- but there's something really fishy about his death ... and people are pointing fingers at his girlfriend.
(18:20) Channing Tatum's new stripper movie "Magic Mike" is causing a lot of controversy ... with a few of the dudes he used to strip alongside. One of them, Thomas "Awesome" Austin, calls in ... and ... well ... his interview is beyond ridiculous.
(25:30) Kris Humphries ex-hookup left him a nasty voicemail after he started ignoring her ... and we have a copy. But ... some people think it actually shows that she's not the loose-lipped looney bird Kris claims she is.
(29:30) Woody Allen's son rips him via Twitter -- saying he doesn't celebrate Father's Day ... just Brother-in-Law Day. Boom.
(35:35) Hilary Duff -- who just gave birth -- was photographed holding a cigarette ... but claims she was just holding it for a friend. Everyone calls BS on her.
(38:10) "Rock of Ages" bombs at the box office ... what happened? We get first-hand reviews from the only two people in our office who actually saw it.
(40:05) Is George Clooney's girlfriend Stacy Keibler pregnant? Do we really have to answer this?
(40:25) We take your calls!