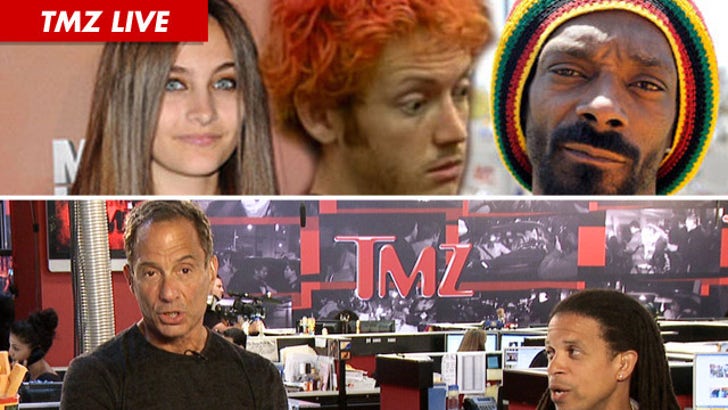 Michael Jackson's children are now major pawns in the war between MJ's siblings and the executors of his Estate. We've got video of the showdown between Paris and Janet Jackson ... and details on how things eventually got physical between them!
Plus, the first lawsuit against Colorado shooter James Holmes is being drawn up ... but it could be a tough to win.
Also, Snoop Dogg turns reggae star?? Kinda makes sense, no? Yeah, mon!!

(0:00) Breaking news -- Sherman Hemsley died today ... so we pay tribute to arguably the greatest TV show theme song ever.
(3:00) The Jackson family has gone crazy -- as Michael Jackson's sibling wage a war to get their hands on some his estate's money ... and putting his kids right in the middle of it.
(12:00) The first lawsuit in the "Dark Knight Rises" massacre is about to be filed -- and the victim is blaming everyone except James Holmes.
(18:00) The woman claiming Eddie Griffin unjustly targeted her during a comedy show calls in to say she wants an apology ... because she's lawyered up.
(23:00) Is Mariah Carey worth $18 million a season? Harvey thinks so ... if and only if she's a huge bitch on the show.
(27:00) Kirstie Alley is being sued over a weight loss product she was selling ... but can a celebrity spokesperson really get sued over this?
(30:00) Jennifer Lopez's boyfriend goes to either a sex shop or a peep show on her birthday ... and either way ... good for him.
(34:00) Breaking news -- insane details about the Jackson family fight ... we're told Paris Jackson and Janet Jackson got into a SLAP FIGHT!
(38:00) Snoop Dogg is now calling himself Snoop Lion -- because he's releasing a reggae song. How does it sound.
(41:00) Mark Wahlberg's sick mansion is up for sale ... and we have photos of it.
(40:20) We take your calls!