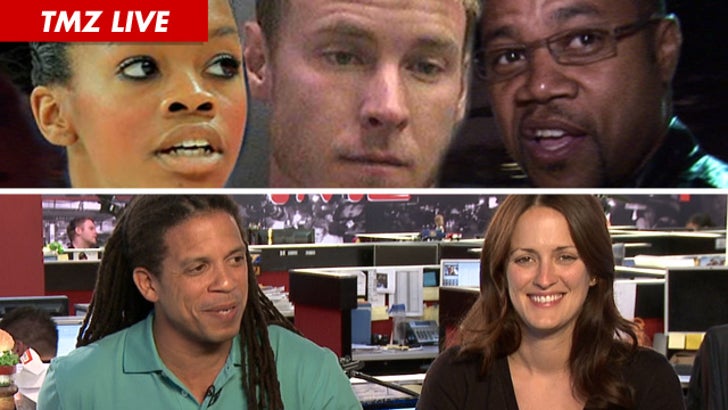 TMZ Live
Some people think NBC dissed Olympic sweetheart Gabby Douglas by airing a promo with a monkey doing gymnastics. Was this racism ... or is everyone just getting way too sensitive?
Plus, the story we broke -- 'Bachelorette' star Kasey Kahl busted and accused of dishing out a nightclub beating while high on paint thinner! You gotta hear Kasey's explanation for this crazy arrest.
And Cuba Gooding Jr.'s run-in with a bartender -- cops are dropping the whole thing, but our video of the incident raises some new questions.

00:00 - Cuba Gooding, Jr. is off the hook for allegedly shoving a New Orleans bartender, and we've got surprising video from outside the bar that night.
4:43 - Obviously, Ryan Lochte can do things in a swimming pool we mortals can only dream of... but we may have more common ground than we thought!
8:49 - NBC aired a controversial commercial following Gabby Douglas' historic gymnastics triumph last night-- Was it racist? Was it a coincidence? Should it even be controversial to begin with?
14:37 - The National Enquirer is standing by their story on Macaulay Culkin-- but did they cross the line by comparing him to a recently deceased star?
18:08 - Former 'Bachelorette' star Kasey Kahl checks in and out of jail for his alleged January skirmish, but one new detail has us scratching our heads...
22:16 - Music icon Stevie Wonder signs, seals, and delivers divorce docs to his wife.
25:40 - Has TLC jumped the pregnant teen shark with yet another reality show about teen pregnancy?
31:18 - As if Michael Phelps doesn't have a record 21 Olympic medals to brag about, check out the high profile fans giving him love on Twitter!
33:42 - Floyd Mayweather, Jr. is out of the slammer-- so naturally, another famous face was waiting to pick him up on the outside.
36:14 - Some strange details surface surrounding former Laker Matt Barnes' arrest earlier this week.
39:17 - Charles and his fellow New York Yankees fans can breathe a sigh of relief-- Derek Jeter isn't out for the season, and he's keeping his name (and gender).
41:27 - We take your calls!