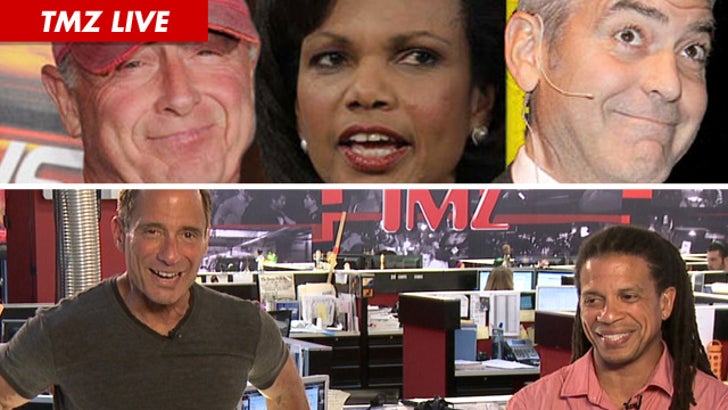 TMZ Live
Tony Scott's suicide stunned celeb friends -- like Tom Cruise -- and also dozens of people who saw him plunge from a bridge. We'll tell you what we learned about Tony's death from law enforcement sources and the witnesses.
Plus, Condoleeza Rice gains membership to Augusta National Golf Club ... the infamously exclusive home of The Masters. It might seem like a giant leap forward for women, but Harvey thinks the change is disingenuous. What do you think?
Also, President Obama's flaunting his friendship with George Clooney ... again. Could it come back to bite him in the ass on election day?

7:04 - It's the shocker of all shockers-- Kris Humphries' ex Myla Sinanaj doesn't feel too fondly about his ex Kim Kardashian!

13:11 - After years of defiance, Augusta National Golf Club has FINALLY opened its door to 2 female members... but their names may surprise you.

18:04 - Is Halle Berry becoming the villain in her custody battle for daughter Nahla, or is an escape to France the right move?

21:15 - Mel Gibson and a hot European musician chick walk into a-- By all means, stop us if you think you've heard this one before.

29:50 - With the election looming, Barack Obama's man crush on George Clooney gains steam. (Really, can you blame the guy?)

35:01 - If you thought the last 'Indiana Jones' movie was out there, you won't believe what Shia LaBeouf has planned for his next role.

39:12 - Rihanna opens up to Oprah on a "secret" we've known all along: Chris Brown is still her one and only.

40:28 - At the ripe old age of 75, Dustin Hoffman appears to have found the Fountain of Youth.