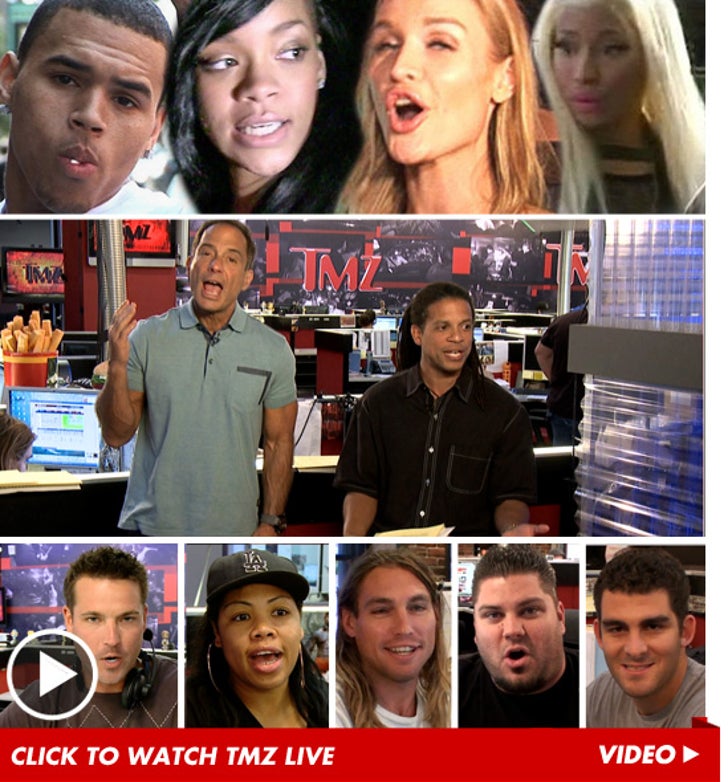 Chris Brown followed up date night with Rihanna by making the biggest "no-duh" announcement -- he's breaking up with his other GF, Karrueche. Chris still won't cop to dating RiRi, but is ANYONE buying his "just friends" comment?
Plus, Joanna Krupa from 'Housewives of Miami' joins us to say ... she's no hooker, but she thinks she knows who started the rumor. Will JK sue, and why's she so pissed about her alleged $10,000 escort fee?
Also, Nicki Minaj vs. Mariah Carey explodes again! Is Mariah smart to beef up her security -- or is it a classic overreacting-diva move? Everyone's choosing sides in the "American Idol" war.

(0:00) Chris Brown and Rihanna went public last night in a big way -- flirting for everyone to see at a Jay-Z concert. Then hours later ... Chris dumped his girlfriend.
(10:00) Nicki Minaj vs Mariah Carey day two ... and now Barbara Walters is in the middle of the epic diva fight.
(14:10) Jim Lehrer got trampled by Mitt Romney and President Obama last night -- and it was painful. But there's one thing about it that Harvey like.
(18:00) "DWTS" alum Joanna Krupa joins the show to laugh off claims that she's a high-priced hooker. Her main argument ... she cost WAY more than $10k.
(24:00) Anderson Cooper GOES OFF on Star Jones for claiming he came out of the closet for ratings.
(27:30) It's about to get REAL heated in the newsroom -- because it's time to argue about one of the touchiest subjects of all ... obesity.
(29:00) AJ McLean loves ass.
(32:00) Justin Timberlake is unfairly tossed aside by the Shriners.
(35:00) Christina Aguilera's boobs -- so big, not even Hillary Clinton can look away.
(38:00) Rage Against the Machine's bassist thinks it's cool to pull his own teeth.
(40:00) We take your calls!