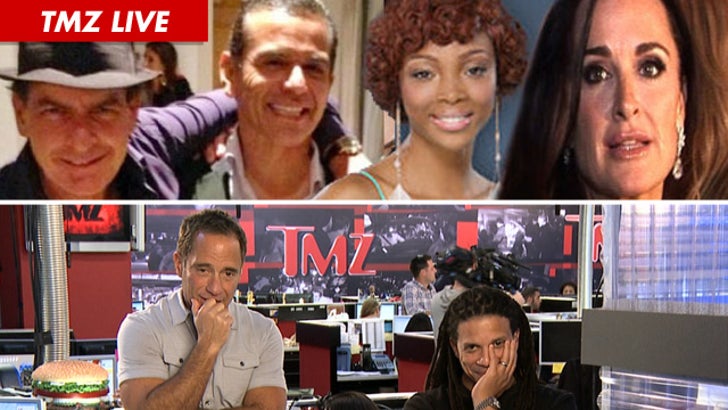 Charlie Sheen and LA Mayor Antonio Villaraigosa have a much different opinion of what happened when they hung out together in Mexico. Was it just a quick photo op -- as the mayor claims -- or a couple guys shooting the you-know-what for several hours?
Plus, "The Bachelor" suddenly has more minorities to choose from ... including one woman who prompted a simply jaw-dropping comment in our newsroom.
And, 'Real Housewives' star Kyle Richards calls in to talk about surviving her new show ... 'Stars in Danger' -- and it sounds like she barely made it. Brace yourself for some painful details.

(0:00) Charlie Sheen calls BS on LA Mayor Antonio Villaraigosa -- saying the two hung out and drank together for HOURS ... not just posing for a picture together. Somebody's lying.
(5:00) Kim Kardashian and Kanye West plunked down $11 million on a mansion ... so they can gut and rebuild. Mike has all the details.
(10:00) "Criminal Minds" and "Dharma and Greg" star Thomas Gibson was busted for DUI -- and we have video of him being taken down by a pile of cops.
(14:00) Tommy Chong says it doesn't surprise him that Justin Bieber smokes weed ... because he's crazy talented. He brings up a good point ... can pot -- or other drugs -- really help the creative process? Remember the Beatles?
(18:00) "Real Housewives" star Kyle Richards is taking part in a dangerous new show -- where celebs learn how to high dive. Sounds painful ... she calls in to tell us all about it.
(24:00) This subject is about to get out of hand -- "The Bachelor" finally has a few Black contestants on this year ... as well as one lady with a partial arm. Apologies in advance.
(29:00) "Teen Mom" Farrah Abraham plucks her 3 year old's eyebrows -- is that too young to force beauty tips on your kid?
(33:00) "Hangover" director Todd Phillips is allegedly being stalked in one of the craziest situations we've ever heard of ... and we've heard of A LOT.
(36:00) Mariah Carey shows off her in shape body -- but some people in the newsroom think she's doing more than just dieting .... and the proof is in the ... belly button?
(38:00) The floor is yours!