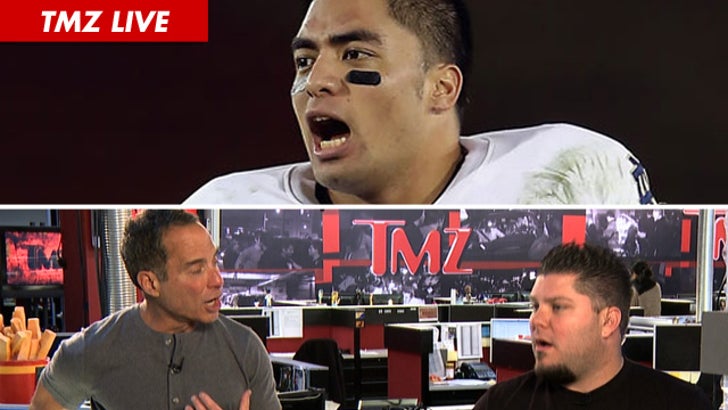 A woman caught in middle of the Manti Te'o fake-dead-girlfriend hoax goes on TMZ live and gives a first-hand blow-by-blow of an encounter she had with a man who may have been up to his neck in the scam.

(0:00) The Manti Te'o fake-dead girlfriend hoax -- we talk to a woman who was in the middle of it all, and she reveals key elements about one of the craziest story's we've ever heard.
(18:00) Britney Spears' potential deal for Las Vegas residency has forced a major bidding war. So how much would you pay to see Britney in Sin City?
(21:00) We showed you video of a brutal murder outside of a Hollywood nightclub -- and now the alleged trigger man has been arrested.
(24:00) A report suggests that Kobe Bryant's divorce would've cost him over a million bucks a month in child and spousal support ... Harvey explains why it's a load of BS.
(28:00) A former Miss America contestant joins the show to claim she was moved from her seat at this year's pageant because she was Black -- but this story isn't holding water.
(33:00) It's time again for ... Tim's worst pitches of the week!
(38:00) The floor is yours!