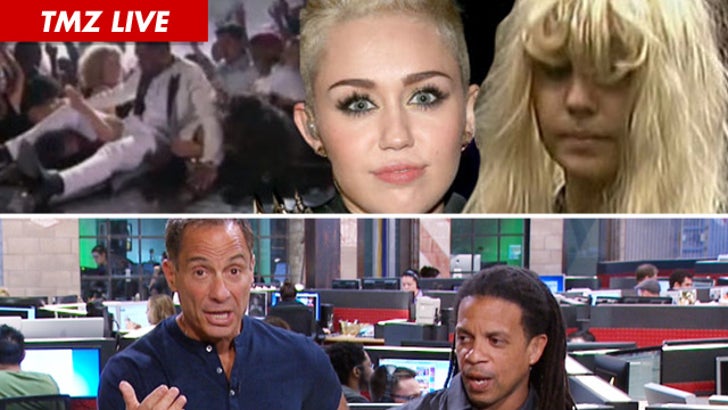 TMZ Live
Singer Miguel's Billboard Music Awards performance was unforgettable ... for the woman he landed on -- because now she's claiming serious brain damage. Based on the video ... it's not IF he pays, but how much!
Plus, Miley Cyrus﻿ sings about doing lines of cocaine in her new song -- is she just pretending to be a rock star ... or actually walking the walk?
And, Is Playboy taking advantage of Amanda Bynes by offering her a radio show? Playboy Radio hosts Jessica Hall and Bob Guiney call in to explain why that's not the case.

(0:00) Miguel may be screwed after injuring a fan during his stupid acrobatic move at the BMA's ... we have new shocking information that backs that up.
(10:00) Justin Bieber -- we're told cops think he was the one behind the wheel during his neighborhood speeding incident.
(14:00) Miley Cyrus sings about doing coke in her new song -- has she gone too far ... or is this totally normal for musicians?
(18:00) Playboy radio's Jessica Hall and Bob Guiney call in to explain why they're offering Amanda Bynes her own radio show.
(24:00) Snooki says she lost her virginity at 14 -- some people think it's crazy ... others think it's par for the course.
(27:00) Ozzy Osbourne -- delusional about his relationship with Sharon?
(30:00) "Bachelorette" contestant Kasey Kahl is either the worst actor ever ... or just really didn't want to give a sincere apology to two people he attacked.
(32:00) Nicole Richie and Sofia Vergara -- looking better than ever.
(36:00) The floor is yours!
(41:00) Justin Bieber's biggest crime yet -- his fashion at the Miami Heat game ... where Flo Rida's manager was ejected for yelling at players.