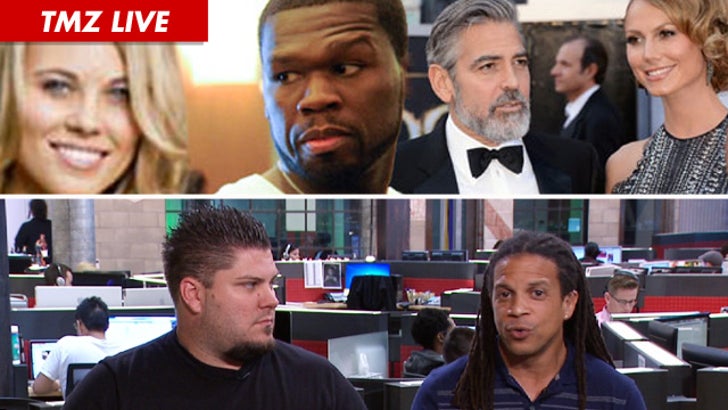 "Big Brother" aired a string of Aaryn Gries' racist comments, and the most shocking part was how an African-American houseguest kept silent about it. Former 'BB' star Marvin Latimer joins us ... and rips the current cast for not ripping Aaryn.
Plus, 50 Cent's facing serious charges in a domestic violence case with his baby mama, Daphne Joy -- but thinks it's appropriate to crack jokes on Instagram?? Out of line?
And, George Clooney hasn't dumped Stacy Keibler ... yet. We'll tell you why the famous bachelor is still far from settling down.

(0:00) "Big Brother" racism -- former cast member Marvin Latimer joins us ... and goes off on everyone who is (or isn't) involved.
(10:00) Beyonce and Solange Knowles -- too busy for their father's second marriage. Or are they?
(15:00) Charles Saatchi files for divorce from his wife ... that he choked!!! This guy...
(18:00) A "Biggest Loser" contestant is sued for putting on a few pounds ... is it out of line?
(24:00) 50 Cent posts photos of himself NOT in jail ... making a joke of the domestic violence charges ... and it could bite him in the ass.
(27:00) Two powerful business people tweet and Facebook about the SF plane crash -- are they drawing attention to themselves ... or just doing what anyone else would do in that situation?
(30:00) Former MLB pitcher Kris Benson's estranged wife arrested in one of the craziest situations we've ever heard -- involving a bulletproof vest and a gun.
(32:00) George Clooney -- signs he's leaving Stacy Keibler. Do you blame him?
(34:00) Drew Rosenhaus -- badass for wrestling a shark in Florida?
(36:00) The floor is yours!
(41:00) Prince Jackson can kick your butt now.