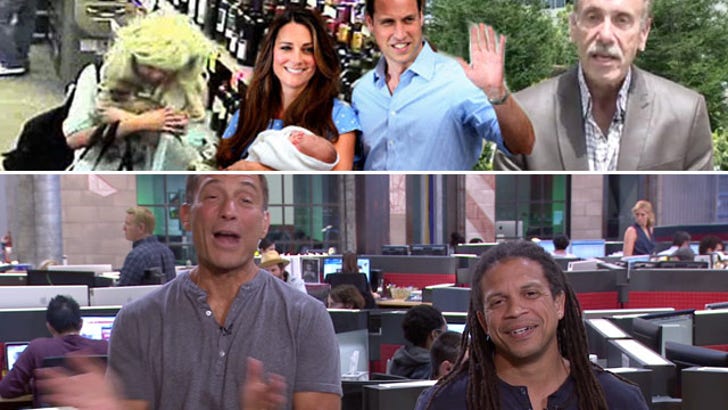 Amanda Bynes could be hospitalized well beyond the 72-hour 5150 hold. We've learned her parents are taking steps to put Amanda under a conservatorship -- a la Britney Spears -- but will it save her like Brit?
Plus, England's future king George Alexander Louis??? Really? Did William and Kate blow their big shot to prove they're truly modern royals? We think so!
And "Hardcore Pawn" star Les Gold has become Detroit's most successful export since Motown -- and he joined us to reveal how he knows, for a fact, the Motor City is already rebounding from bankruptcy!

(0:00) Amanda Bynes 5150 might be extended, as sources close to the situation tell us doctors think she may be suffering from Schizophrenia.
(8:00) The Royal baby has a name! George Alexander Louis? Royal name or boring name?
(15:00) Anthony Weiner's New York campaign has been derailed after more revealing photos have been released. Will this cost him the primary?
(18:00) We interview "Hardcore Pawn" star Les Gold about the bankrupt city of Detroit.
(24:00) Conrad Murray has a very clear message to the Jackson family and AEG, if they ask him to testify, he has a nuclear confession in store.
(29:00) Adam Levine send a text to his ex-girlfriend telling her he's engaged! Forward thinking or low blow?
(32:00) Richard Gere's Hamptons home is up for sale, and the amount of money he wants is INSANE!
(33:00) Arthur Charles﻿, the "Carfax" guy, skypes in to TMZ Live to let us know how his Valet career is doing after being featured on TMZ TV.
(36:00) The floor is yours!
(41:00) It's time again for TMZ Hate Mail!