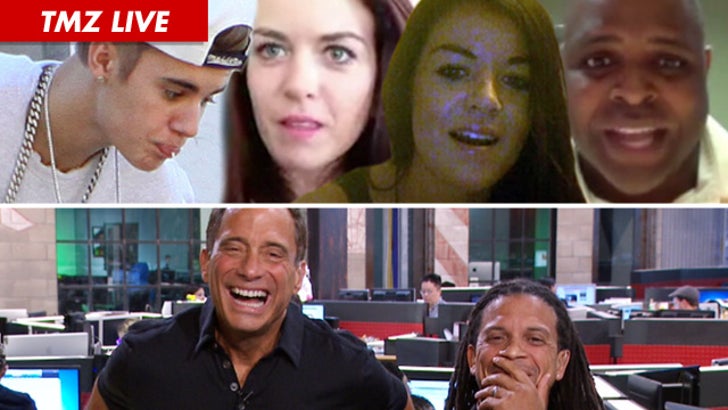 Justin Bieber's camp is spitting mad over those pics of JB spitting from his hotel balcony -- claiming we superimposed shots of Bieber fans. Umm ... not even close.
Plus, it's a real-life 'Hunger Games' -- the new reality show called "Capture" -- and 2 of the competitors, Nikita and Jade Ramsey ((hot twins, of course) ... tell us how they got ready for battle.
And, our fave food critic Daymon "Daym" Patterson from the Travel Channel ... joined us to debate the East Coast pizza belt theory -- can Chicago deep dish challenge? Daym weighs in!

(0:00) Justin Bieber's camp accused TMZ of Photoshopping him spitting off his hotel balcony -- and it's so ridiculous ... they don't even belieb it.
(6:00) Lindsay Lohan's extended stay at rehab -- a sign of real change ... or just another of her broken promises?
(10:00) The Kardashian's post a weird video of Kris Jenner allegedly chasing a paparazzi off their property ... but some people think it's a load of bull.
(15:00) Anthony Weiner's sexting partner ... moving on to porn? You don't say!
(18:00) Nikita and Jade Ramsey join us to explain a crazy new "Hunger Games" style reality show they're starring in called "Capture." And it looks awesome!
(24:00) Teresa and Joe Guidice could be screwed -- and it's scaring the crap out of a lot of people who may have made the same mistakes they did.
(29:00) Paris Hilton will be DJing in Ibiza -- and Harvey is shocked that he barely associates her with her sex tape ... unlike his thoughts on Kim Kardashian.
(32:00) The best food critic around -- Daymon "Daym" Patterson -- joins us to argue whether or not the "pizza belt" is BS.
(36:00) The floor is yours!
(41:00) Harry Styles -- NOT bisexual ... he thinks.