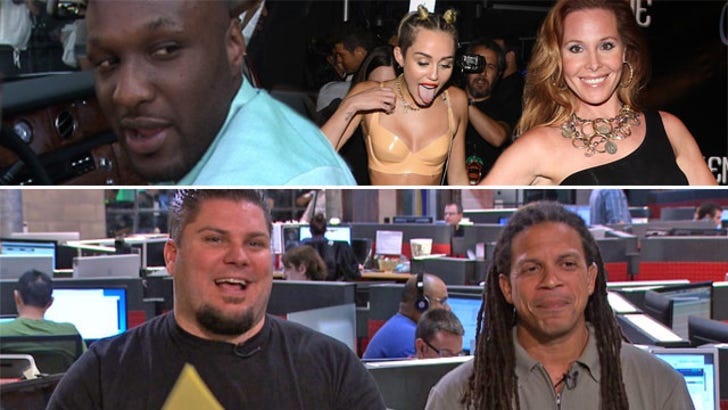 Khloe Kardashian and Lamar Odom finally met to discuss the future of their marriage and his drug addiction -- and the big question is ... will LO agree to go to rehab. We've got new video ... and it might show there's a glimmer of hope.
Plus, Miley Cyrus has heard all the haters -- and now she's firing back at them ... with even more butt than we saw on stage at the VMAs!
And ... "Pippi Longstocking" star Tami Erin -- she made a sex tape, and someone's shopping it around ... but she is NOT happy about it! Tami joined us to blast the ex-bf she's accusing of betraying her.

(0:00) Lamar Odom spotted near Khloe Kardashian's neighborhood -- Khloe hasn't given up on him yet.
(6:00) Alec Baldwin gets in another violent confrontation with a photog.
(10:00) Teresa and Joe Giudice causing problems at the beach -- all the commotion was over just five bucks.
(15:00) Bieber swimming with sharks, and being a good neighbor -- is he turning over a new leaf?
(18:00) Pippi Longstocking star is all grown up. Actress Tami Erin calls in to talk about what she's doing to stop her sex tape being released.
(24:00) Miley Cyrus uses Instagram to prove she doesn't have a pancake butt.
(29:00) Charlie Sheen's off on another adventure -- the search for Bigfoot is on!
(32:00) Amish Mafia: real or fake? Cast member and attorney, Steven Breit, skypes in to talk Amish.
(36:00) The floor is yours!
(41:00) Dick Van Dyke back on the road -- a firy car explosion won't slow him down.