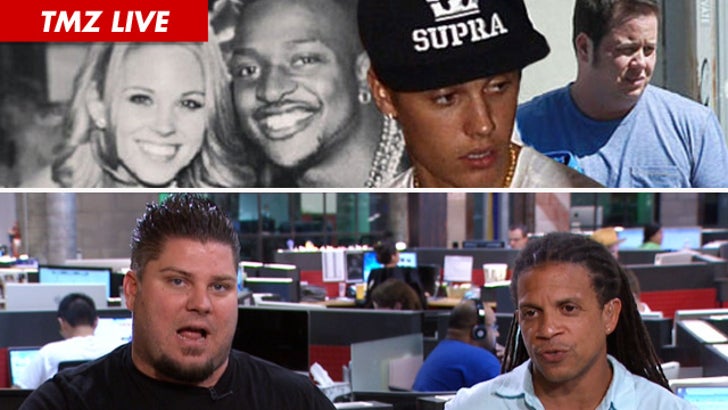 TMZ Live
Is it possible Aaryn Gries said the offensive things she said in the "Big Brother" house ... but is NOT racist? Her biggest defender (an actual Black guy!) calls in to try and clean up the giant mess she made.
Plus, Justin Bieber did NOT say the N-word in a new song -- he's the victim of a not-so-clever, mystery enemy who doesn't know how to spell ... according to his camp.
And, Chaz Bono loses a ton of weight -- and everyone is proud of him ... except one person in the newsroom who thinks he's the Barry Bonds of weight loss.

(0:00) Someone finally comes to "Big Brother" contestant Aaryn's defense -- and African American who says he KNOWS she's not racist.
(6:00) Shanna Moakler sucks the fat out of her stomach, and shows the world.
(10:00) Justin Bieber did NOT say the n-word in a new song ... he was framed!
(14:00) Terrence Howard accused of even more crazy behavior by his ex.
(18:00) NBA star Royce White accused of domestic violence by Maxim model Tania Mehra -- she joins us to back up her allegations.
(24:00) Chaz Bono cuts his weight by a lot, but Mike thinks he's cheating.
(29:00) Melanie Griffith totally supports her daughter Dakota Johnson's super sexual role in "50 Shades of Grey."
(32:00) Gisele Bundchen SINGs in a new ad -- and we're split on whether or not it's terrible or decent.
(34:00) John McCain plays a game on his phone during an important hearing about WAR -- and one of our viewers rips him a new one.
(36:00) The floor is yours!
(41:00) Time again to read our viewer hate mail!