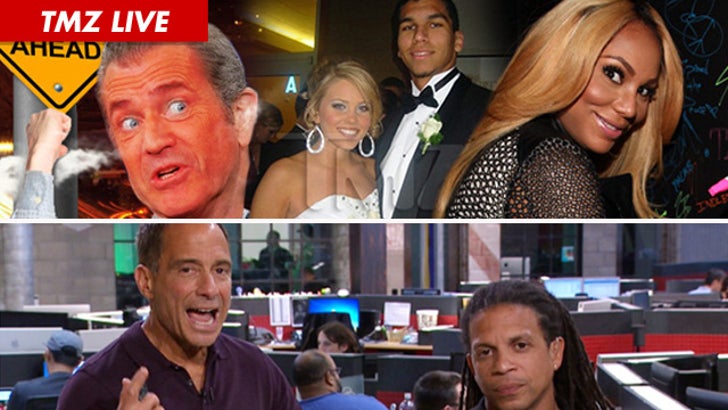 TMZ Live
So, they meet again -- Mel Gibson and cops in Malibu ... and this once again Mel lost his cool. Question is, why does Mel think cops did him wrong back in 2006?? Wasn't it the other way around?
Plus, "Big Brother" accused racist Aaryn Gries -- we've finally found pics of the Black guy she went to prom with ... but is that enough to acquit her?? Can you date a Black person and still be racist?
And, Tamar Braxton joins us to explain why she didn't bond with her newborn son at first -- and what it took to change that. Also, her new diet ... we don't recommend it, but it's definitely working for her!

(0:00) Mel Gibson loses his temper with cops in Malibu again -- but this one didn't end so badly as the last time it happened.
(6:00) George Zimmerman's wife is divorcing him -- and she's gonna get a chunk of the money he raised for legal fees.
(10:00) Lamar Odom's drug addiction is worst than anyone thought -- we know how much money he was spending PER DAY on crack.
(14:00) Aaryn Gries' Black prom date -- still not enough to clear of being a racist?
(18:00) Tamar Braxton joins us to explain why she didn't connect with her newborn right away.
(24:00) A brawl on "Real Housewives" that DOESN'T involves women ... is it the real deal or just a publicity stunt.
(29:00) Kenneth Cole ripped for using Syria to push his shoes on Twitter -- but is everyone losing their sense of humor?
(32:00) Justin Bieber's friend -- guilty by association ... of liking limes. We'll explain.
(36:00) The floor is yours!
(41:00) Sophia Vergara eats it ... are high heels really worth it?