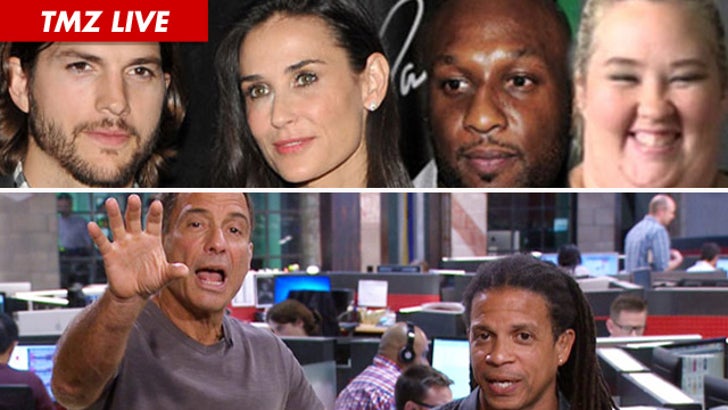 TMZ Live
Ashton Kutcher and Demi Moore have been at war over spousal support ever since their divorce -- but now they're flying on the same plane ... attending the same conferences, and talking biz deals. Is their cold war finally ending?
Plus, Lamar Odom finally speaks out about his drug addiction, and ... what's that saying about a river in Egypt? Yeah.
Also Mama June and Sugar Bear from 'Honey Boo Boo' join us to explain why they never got married -- and their explanation might make you rethink tying the knot too.

(0:00) Demi Moore and Ashton Kutcher reunite! Is there bitter divorce war coming to an end?
(6:00) Lamar Odom denies his drug addiction ... watch the video and judge for yourself.
(10:00) Kendall Jenner is the biggest threat on the road since ... Gwenyth Paltrow.
(14:00) The Situation finally admits to being addicted to pills ... something he denied for a long time.
(18:00) Mama June and Sugar Bear joins us ... and explain why marriage is crap.
(24:00) Jane Lynch is either the nicest person in the world when it comes to her nasty divorce ... or she's just good at making light of any subject.
(29:00) George Zimmerman's wife could be in a lot of trouble for saying GZ was packing heat during their confrontation.
(32:00) Justin Bieber's sidekick Lil Za admits Lil Twist is trying to get his own reality show.
(36:00) The floor is yours!
(41:00) Kanye West stoops to Ray J's level.