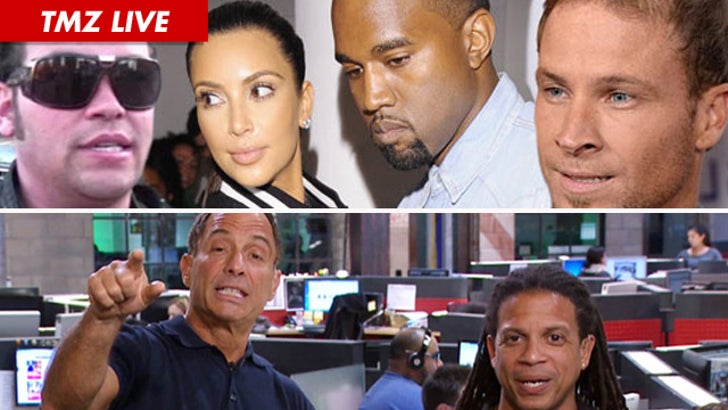 TMZ Live
Jon Gosselin pulled out a gun ... when a female paparazzo tailed him back to his house -- and opened fire. Jon says it was just a warning shot, but did he overreact?
Plus, Kim Kardashian's first night back on the party scene since having her baby -- and it's a HUGE one. She and Kanye partied with R. Kelly, Brian Grazer, Mick Jagger, and ... OPRAH!!
And, Backstreet Boys singer Brian Littrell gets some revenge on TMZ -- he joins us to show off his massive home in Georgia ... after we poked fun at him for his pint-sized digs in LA!

(0:00) Jon Gosselin pulls a gun on a photog for allegedly venturing onto his private property -- and it doesn't look like he broke any laws.
(6:00) Miley Cyrus turns on the waterworks while performing "Wrecking Ball" -- legit tears ... or just hamming it up for press?
(10:00) Kanye West is winning his fight against photographers -- NO ONE asked him or Kim Kardashian a single question this weekend.
(14:00) Oscar De Le Hoya -- there are photos of him allegedly using cocaine ... and he knows about them.
(18:00) Brian Littrell joins us to get sweet, sweet revenge against the staffer that poked fun of the size of his house.
(24:00) "Big Brother" star Aaryn Gries is trying to turn over her racist leaf.
(27:00) Hillary Clinton -- really giving Anthony Weiner the ultimatum ... dump him or get dumped?
(32:00) Chris Brown takes a shot at Jay-Z -- so why is Hov so untouchable?
(36:00) The floor is yours!
(41:00) Rihanna takes a photo with an endangered animal ... and there are serious consequences ... but not for her.