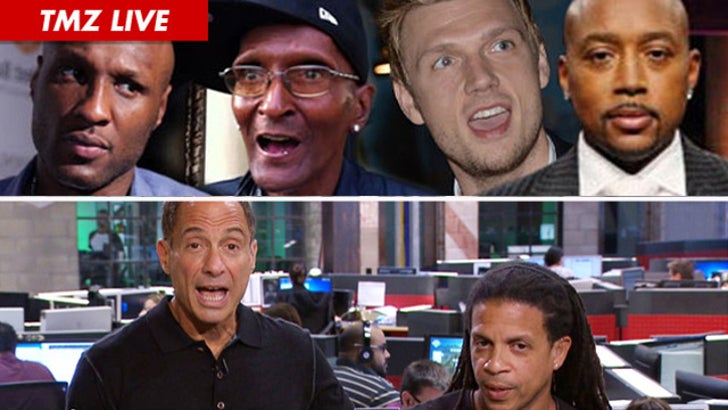 TMZ Live
Lamar Odom ripped his father for trashing Khloe Kardashian and her family -- but now his dad, Joe Odom is not only apologizing ... he's saying he believes Lamar is clean and sober!!
Plus, Nick Carter is a huge POC (piece of crap) -- after never giving Paris Hilton a heads up that he was gonna bash her in his new book. You have to hear him try to explain it from his ridiculous perspective.
And, Daymond John from "Shark Tank" joins us -- and Harvey pretends it's 2005 again and pitches the idea of TMZ to him ... and result is beyond hilarious.

(0:00) Lamar Odom rips his dad for bashing the Kardashians -- and we have exclusive video of his dad's response.
(7:00) Kanye West's plan on how to keep from roughing up another photographer.
(10:00) Nick Carter takes a beating for bashing Paris Hilton in his new book.
(14:00) Samuel L. Jackson takes on President Obama for talking too Black ... was he out of line?
(18:00) Daymond John from "Shark Tank" comes on -- and picks apart Harvey's pitch for TMZ.
(24:00) Kim Kardashian claims she wasn't in hiding after coming out of hiding.
(29:00) Amanda Bynes -- should she be let off of her DUI charge due to her mental state at the time?
(32:00) Michael Lohan finally takes some blame for the way Lindsay turned out.
(36:00) The floor is yours!
(41:00) It's again to read your vicious hate mail!