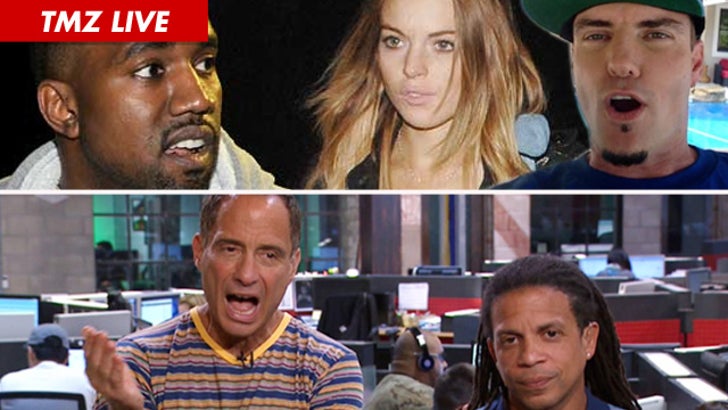 TMZ Live
Kanye West is suddenly downright loveable with paparazzi -- all he had to do was shift continents. But he's no idiot ... there's a reason Kanye wants the world to see him buddy up to photogs. We'll explain why his plan might backfire.
Plus, Lindsay Lohan's parents getting the ole heave ho from Oprah! Good move or bad for her to cut Michael and Dina out of the Lindsay reality series?
And, Vanilla Ice to the rescue! He joins us to explain how Justin BIeber and Miley Cyrus can avoid a downfall like his own ... and drops some serious, speaking-from-experience wisdom bombs on us.

(0:00) Kanye West's love-fest with French paparazzi ... and the best bitch face we've seen since McKayla Maroney.
(7:00) Amanda Bynes bailed on UCLA Medical Center ... for a rehab joint that DOESN'T specialize in her issues.
(10:00) Emma Roberts and her BF have a lovely little date night after their physical fight a few months ago. So why isn't she getting the same flack that Rihanna got for being with Chris Brown.
(14:00) Lamar Odom -- cutting his dad off for taking a shot at the Kardashians.
(18:00) Vanilla Ice joins us to explain what Justin Bieber and Miley Cyrus are doing wrong ... and he drops some serious wisdom on us.
(24:00) Lindsay Lohan's parents ... 86'd by Oprah Winfrey.
(29:00) "Million Dollar Listings" honcho treats his whole staff to a bomb trip.
(32:00) Armored cars in Hollywood -- it's happening ... and we talk to one of the guys behind it all, Ryan Friedlinghaus from West Coast Customs.
(36:00) The floor is yours!
(41:00) The "Breaking Bad" finale ... we'll try not to spoil it too much.