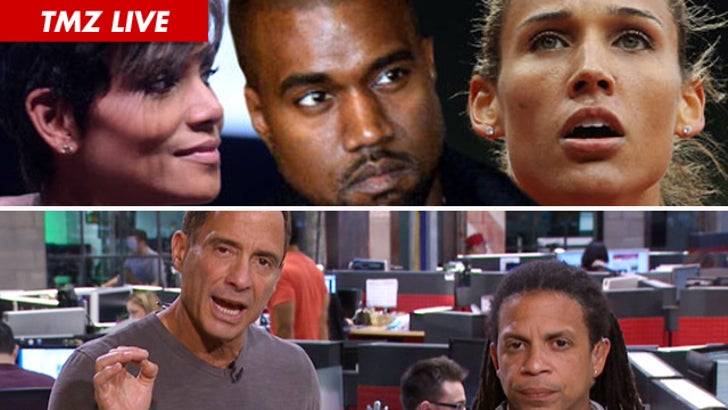 TMZ Live
Halle Berry's new baby boy could lead to some new drama -- will her 2 baby daddies ... Olivier Martinez and Gabriel Aubry ... be able to get along for sake of the family?
Plus, Kanye West ordered to stay 10 yards away from the photog he allegedly assaulted -- which probably sounds great from Kanye's point of view ... minus one troublesome detail.
And, Olympic hurdler Lolo Jones joins us to talk about the dramatic weight gain she's undergoing to become a bobsledder -- which she says has done wonders for one particular part of her body ... her butt.

(0:00) Justin Bieber -- another photo allegedly showing him smoking a blunt surfaces ... but his camp is crying Photoshop.
(6:00) Halle Berry gives birth -- so the big question ... will her two hot-headed baby daddies call a truce for the kids?
(10:00) Kanye West already dealt some punishment for his alleged attack on a photographer.
(14:00) Khloe appears to deal with Lamar's crack problem on "Keeping Up" ... and it's the first real moment the show's ever had.
(18:00) Lolo Jones joins us to explain her insane diet ... transforming herself from a no-butted hurdler to a big-butted bobsledder.
(24:00) Katherine Jackson is one mad mother after Jermaine drops a ton of dough on a new Ferrari.
(29:00) Britney Spears sings at all her concerts ... this according to Britney Spears.
(32:00) Diddy's keeping it all in the family -- hiring a bunch of rich kids to helm his new music TV show.
(34:00) Chris Brown lost his virginity at 8 ... you won't believe what he had to say about it.
(36:00) The floor is yours!
(41:00) The most ridiculous tattoo you've ever seen -- thanks to Korn's guitarist!