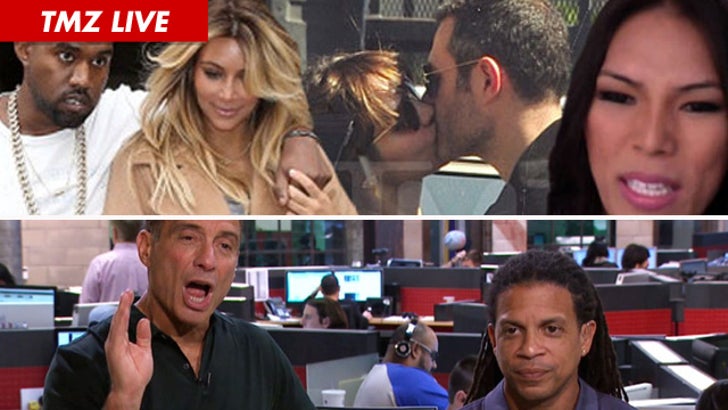 Kim Kardashian and Kanye West finally got engaged, and they did it in a BIG way ... maybe too big?? If you had the money ... would YOU drop that kinda cash -- renting out an entire stadium -- just for a proposal? Imagine what the wedding's gonna be like!
Plus, Katharine McPhee's very public makeout session with her "Smash" director. Problem is ... he's still married to Mary McCormack. Is she headed down the same path as Kristen Stewart?
And, "Project Runway" contestant Ari South (formerly Andy South) joins us to talk about being a transgender -- and the screwed up hoops she had to jump through to begin her transformation.

(0:00) Kanye and Kim get hitched in grand fashion -- will she chance another big wedding after her epic failure with Kris Humphries?
(6:00) "Smash" star Katherine McPhee publicly hooks up with the director of the show ... and they're both married to other people.
(10:00) Lamar Odom opens up about Khloe, the Lakers, and life in a very telling interview.
(14:00) Pauly D has a love child! Anyone surprised?
(18:00) Project Runway star Ari South joins us to talk about her decision to transition from a male to a female.
(24:00) Jenna Jameson was a mess during an TV interview -- are you buying her excuse for being a trainwreck?
(29:00) CeeLo Green pleads not guilty to drug charges.
(32:00) Justin Bieber's new song ... is really oral.
(36:00) The floor is yours!
(41:00) Wayne Newton's yacht sinks mysteriously.