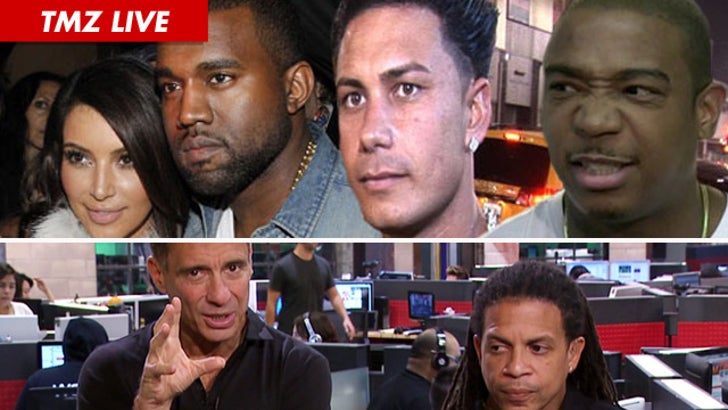 TMZ Live
Kris Jenner says everything's cool with Bruce -- so why wasn't he in San Fran for Kim Kardashian and Kanye West's big engagement celebration.
Plus, Pauly D's baby mama drama just got deeper. She's trying to sell texts from him suggesting she have an abortion. Does this make you think ... she's just in this for a big payday?
And, rapper Ja Rule joins us to explain how he was able to prepare killer meals in prison -- and how a joke about him writing a cookbook may have actually landed him a deal.

(0:00) Kim and Kanye's engagement party -- where was Bruce Jenner?
(6:00) Lindsay Lohan swears she wasn't reaching for a wine bottle in that mysterious picture -- you buying it?
(10:00) Pauly D wanted his baby mama to get an abortion.
(14:00) Rihanna proves once again why her Instagram photos are the best. You gotta see the skin she's showing.
(18:00) Ja Rule joins us to talk about his stint in prison, how he was able to cook so well, how he got buff, and the joke that lead to a book offer.
(24:00) "Fifty Shades of Grey" has their new man -- let the outrage/celebration begin!
(29:00) Evelyn Lozado dind't want to do a "Basketball Wives" reunion -- and it's all because of her ex Chad Johnson.
(32:00) Ellen Page is furious after a video game her image is featured in was hacked ... and her naked video game body was exposed.
(36:00) The floor is yours!
(41:00) It's time again for Tim's rejected pitches of the week!