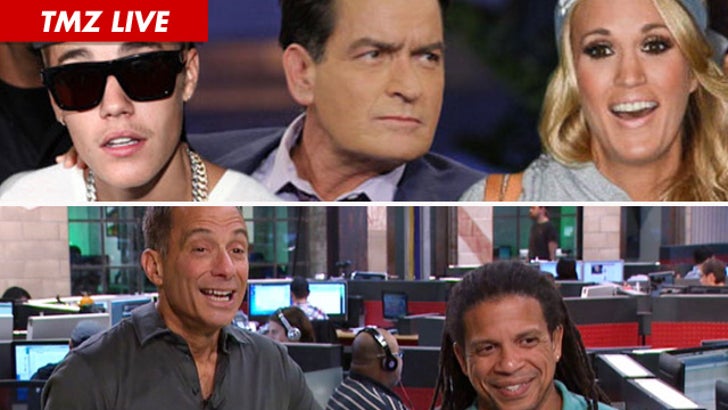 Justin Bieber wasn't hanging with a hooker in that video that's blown up on YouTube -- instead he was the victim of a creepy houseguest ... according to JB's people. But isn't he still guilty of being way too naive around strangers?
Plus, the war over Charlie Sheen's kids moves into a DCFS hearing room ... without Charlie. Will Brooke Mueller and Denise Richards be able to hammer out an agreement on their own?
And, Carrie Underwood and Brad Paisley rip the Obamacare website at the CMAs -- to raucous applause. Just an anti-Obama atmosphere ... and a screw-up we can all agree on?

(0:00) Justin Bieber hit with a nasty rumor that he hooked up with a hooker -- but we're here to tell you it ain't true.
(5:00) Charlie, Denise and Brooke square off -- can they find an amicable solution to custody of the twin boys ... or is this a way that's just beginning?
(10:00) Lamar Odom and Khloe -- major signs it'll officially come to an end soon.
(14:00) CMAs rip Obamacare -- was the crowd (minus Taylor Swift) a little too ready to cheer it's missteps?
(18:00) Million Dollar Listing star Josh Altman joins us to explain how the hell he almost drove his truck THROUGH the House of Blues.
(24:00) Kris Jenner says she cried and cried over Kim's sex tape -- the one that made them untold millions. Really think she was upset about it?
(28:00) Pauly D -- finally getting to his little bundle of joy.
(32:00) Chris Brown goes after Frank Ocean -- by saying he was the good guy in their massive brawl.
(36:00) The floor is yours!
(41:00) It's time again for Tim's rejected pitches of the week!