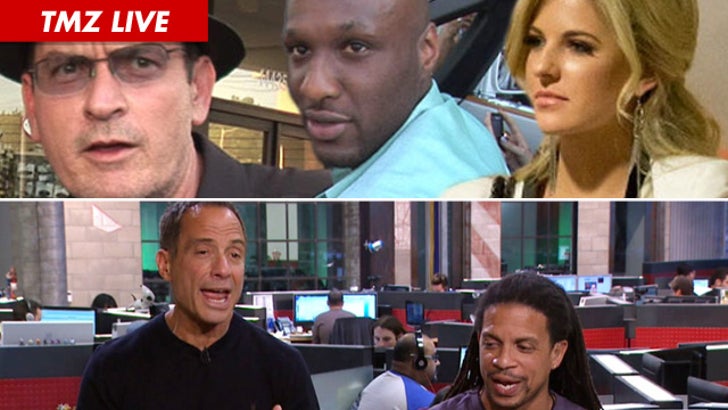 TMZ Live
A Charlie Sheen sex tape is at the center of a huge missing person case. One of the key witnesses in the theft of the video was about to testify, but now he's disappeared and there are signs of violence. Did someone make the guy disappear?
Plus, the bizarre Lamar Odom shirtless rap video ... talking about drugs and cheating on Khloe Kardashian. Has he fallen off the wagon again?
And, "The Hunger Games" star Stephanie Leigh Schlund joins us to about Jennifer Lawrence's rise, her crazy preparation she had to do for the role, and to solve a major "The Price Is Right" mystery.

(0:00) This is one of the strangest stories in TMZ history -- involving a Charlie Sheen sex tape, naked photos of Nicolas Cage, and missing person.
(6:00) Lamar Odom is back in the danger zone -- we have video of him shirtless, messed up, and rapping about cheating on Khloe.
(10:00) Chris Brown's latest violent incidents have him in trouble on two coasts.
(14:00) Josh Brolin checks into rehab after videos surfaced of him wasted and freaking out on multiple people.
(18:00) "The Hunger Games" star Stephanie Leigh Schlund joins us to talk about the rise of Jennifer Lawrence, a controversial Hunger Games theme park, and to solve a major mystery about "The Price is Right."
(24:00) Justin Bieber's bodyguard allegedly assaults a photographer for taking photos of him.
(27:00) Waka Flacka Flame's mother makes him apologize to Oprah -- but the real question ... would you knock boots with the world's most powerful woman.
(32:00) Charles Manson is ... get ready for it ... about to get married! Oh no.
(36:00) The floor is yours!
(41:00) T.I.'s adorable puppy -- why he finally got one for his kids.