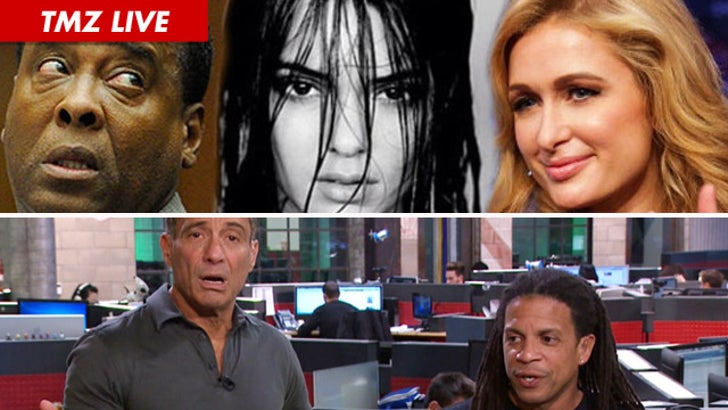 TMZ Live
Conrad Murray's days are numbered -- or so Debbie Rowe thinks. Michael Jackson's ex-wife didn't take kindly to Murray's crack about her looks -- but did she basically paint a target on him by saying he's going to get shot?
Plus, Kendall Jenner's nipples have the Midas touch -- not only did she score a gig at the American Music Awards, but now she's also got a modeling contract. Skin to win ... best way for an 18-year-old to get work?
And, Paris Hilton may not know where Slovenia is, but she's going to war with a website there that's using her porn for profit -- and speaking of profits ... do you really think she's never made money off of it?

(0:00) Conrad Murray offers up some new, disturbing stories about Michael Jackson, MJ's penis, and Debbie Rowe -- and this one warrants the shots fired back by Debbie.
(10:00) Paris Hilton, her sex tape, and Slovakia. How are those three thing related?
(14:00) Miley Cyrus turned 21 with a crazy party at Beacher's Madhouse ... that is basically the same party she's been throwing there for a while now.
(18:00) Singer Colbie Caillat joins us to take a stand against the Sea World float at the Macy's Thanksgiving Day Parade.
(24:00) Kendall Jenner flashes her barely legal boobs ... and gets more than one job out of it. It's the Kardashian way.
(28:00) Rihanna hair set Black women back a few decades according to one pissed of staffer of ours ... but not everyone ... or basically no one ... agrees.
(32:00) Jonah Hill's brother gets engaged to Francesca Eastwood in Vegas -- and she's already annulling it. She also claims she was sober. So...
(36:00) The floor is yours!
(41:00) Seth Rogan and James Franco take on Kanye West's music video "Bound 2" ... and it's beyond hilarious.