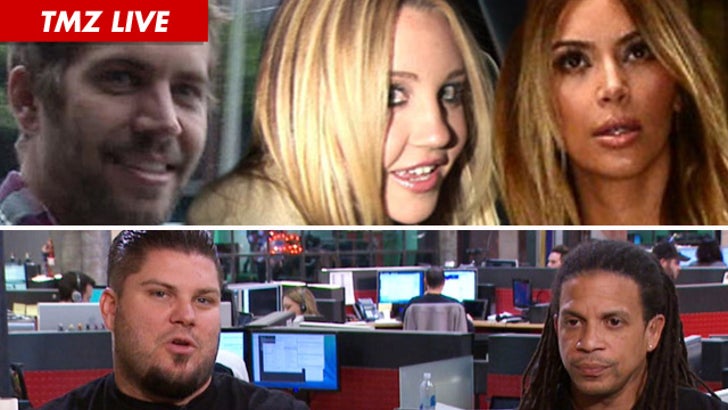 The Internet buzz that Paul Walker can be seen trying to escape the fiery wreckage ... is not true. We've spoken to sources that explain why it just couldn't be.
Plus, Amanda Bynes finally ends her inpatient treatment for mental illness. What's next for her ... health-wise ... and criminally?
And, who's behind some very expensive art of Kim Kardashian that was supposed commissioned by Kanye West himself? The artist, Monica Warhol, joins us to explain the crazy situation.

(0:00) We bust a big rumor about Paul Walker's death -- he did NOT try to escape the burning car, because the coroner says he died upon impact.
(5:30) Amanda Bynes takes a break from rehab to hang out with her family during the holidays ... and we have photos of her exit.
(10:00) A Wendy's employee arrested after dropping a joint in a hamburger -- what would you have done with it?
(14:00) Justin Bieber detained in Australia over weed -- we'll tell you how it all went down.
(18:00) Kim Kardashian, Kanye West, and the mystery paintings he supposedly commissioned from Monica Warhol -- she joins us to explain the mess it's caused.
(24:00) Jay Z and Beyonce -- meatless for his birthday.
(29:00) Sam Champion says adios to GMA -- but is the weather channel really the place to go?
(32:00) Three "Mob Wives" join us to talk about their new blood, potential jail time, and criticism that they give Italians a bad name.
(36:00) The floor is yours!
(41:00) It's time again for Tim's rejected pitches of the week!