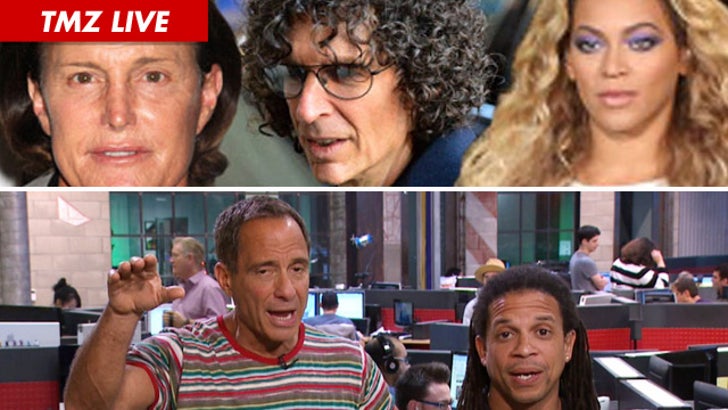 One of the craziest stories we've ever done -- the winner of Howard Stern's "Get My Grandpa Laid" dies moments before his big moment. We're joined by Bunny Ranch owner Denis Hoff and the woman he was supposed to sleep with ... who are torn up by the situation.
And, Beyonce breaks Twitter and wakes up millions of her fans overnight by releasing a secret album. She did ZERO promotion for it ... and no one saw it coming. Did she screw her album sales?

(0:00) Bruce Jenner's suspicious plastic surgery -- we talk a man who's undergoing gender reassignment ... and he think Bruce is definitely doing it ... but not ready to admit it.
(10:00) Beyonce's secret album release ... and how our cameraman ended up in one of her videos.
(18:00) Bunny Ranch owner Denis Hoff and Caressa Kisses join us to talk about the final moments of the grandpa that died moments before doing the deed.
(24:00) Khloe Kardashian ... moments away from filing from divorce.
(29:00) A plastic surgeon gives his two daughters breast implants -- so wrong ... A-OK? Our newsroom argues both sides.
(32:00) An African American female comedian who auditioned for SNL joins us -- she'll explain whether or not she thought is was just a big publicity stunt.
(36:00) The floor is yours!
(41:00) Rihanna ... slammed by a door!