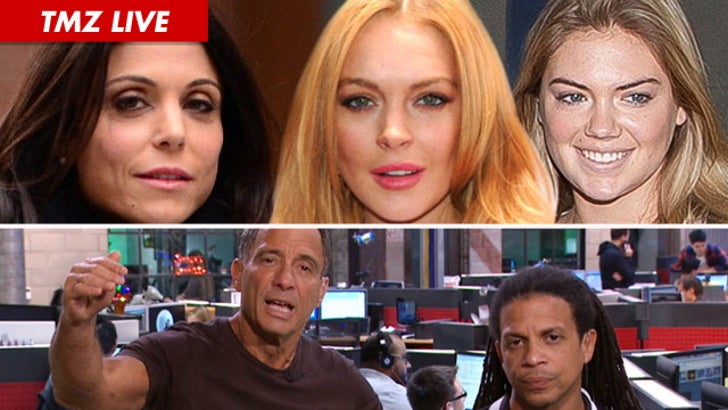 Bethenny Frankel got DENIED at one of the hottest nightclubs in NYC, and the whole scene was caught on video. Did she deserve to be turned away ... or was the doorman just being a jerk because she's a celeb?
Plus, Lindsay Lohan's writing a tell-all book ... about herself. Would you read it ... and is there any chance she'll be honest?
And, legendary model Carol Alt appears to dis Kate Upton by saying she's too big to be a high fashion model -- but Carol says it was taken out of context ... and joins us to explain was she REALLY meant.

(0:00) Former "Real Housewife" Bethenny Frankel denied at a club -- so she tries to force her way around bouncers anyway ... and we have the hilarious video to prove it. We'll also tell you why it all went down.
(4:30) Lindsay Lohan is gearing up to release a tell-all book -- but will she really tell the truth this time? And can she possibly finish it with her sloppy track record?
(10:00) Former Disney star Dylan Sprouse's ex releases pics of him taken semi-naked selfies ... and he totally owns it. Only question ... was it on purpose?
(15:00) Justin Bieber has an emergency at his house party -- 911 was called after a woman passed out. So what really happened that night?
(18:00) Carol Alt joins us to explain exactly what she meant went ranting about Kate Upton's rise to fame .. despite being too large to be a high fashion model.
(24:00) Lamar Odom takes a shot at Khloe after she files for divorce ... we'll tell you why he did it ... and why he regrets doing it.
(29:00) Charlie Sheen attacks Denise Richards on Twitter -- and we're trying to figure out why he would turn on his biggest ally.
(32:00) Omarosa joins us to give us the blow-by-blow of the family feud that erupted over Michael Clarke Duncan's unmarked grave.
(36:00) The floor is yours!
(41:00) Michael Jackson's BFF Dr. Arnie Klein is trying to put the allegations that he made MJ an addict behind him ... by releasing a ridiculous card that you have to see!