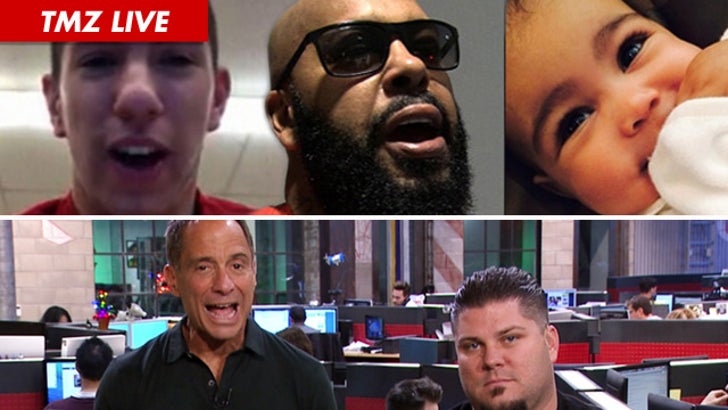 There's a guy who wants a role on "Walking Dead" so badly ... he's putting together his own terrifying audition reel -- but he has one arm and no legs. If you haven't seen his videos ... they're hysterical, and inspiring. Nick Santonastasso will be with us.
Plus, Suge Knight ignited a MASSIVE controversy by saying he wishes people would use the n-word instead of "African American." Does he have a point ... or is he sending race relations back to the 50s and 60s?
And, Kim Kardashian is under fire after releasing a photo of North West -- did she Photoshop his unibrow out? Or even worse ... did she have it waxed?

(0:00) A disabled Vine star dreams of being a zombie on "Walking Dead" -- you have to see him scare the pants off unsuspecting victims. He joins us to talk about making the best of the obstacles in his life.
(5:00) Kim Kardashian accused of waxing her baby's eyebrows or Photoshopping the crap out of them ... and people are ticked of at either one.
(10:00) Justin Bieber gets roasted at the Laugh Factory -- and it's pretty dang funny.
(14:00) A "Twilight" spoof is under attack by Lionsgate -- and the people behind the movie have an unbelievable defense ... which includes racism.
(18:00) Charlie Sheen takes his war with Denise Richards to another level ... aka money.
(21:00) Chris Brown's probation has been revoked ... but he doesn't get thrown in the slammer ... but the judge did hit him where it hurts. His lungs.
(24:00) Suge Knight says he likes the n-word (with an a) over African American ... igniting a huge debate ... but nothing more heated than the one about the poll we put on the website.
(32:00) Lindsay Lohan tries to rekindle her lackluster music career -- will her new game plan work this time around?
(36:00) The floor is yours!
(41:00) Julia Roberts -- more photos that make her look pregnant!