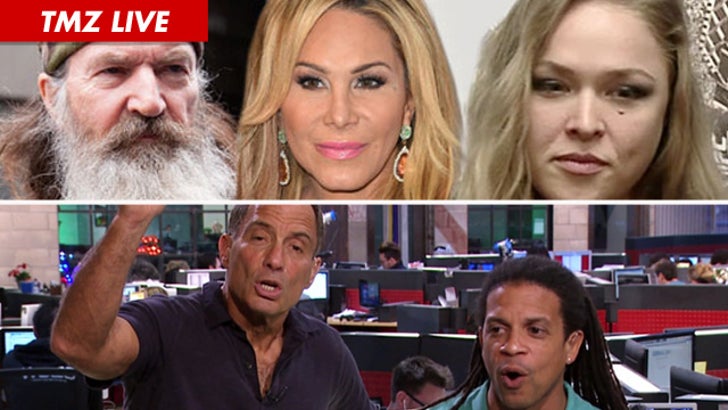 A&E's suspension of Phil Robertson seems totally hypocritical, doesn't it? The "Duck Dynasty" family's never hidden their strong religious beliefs -- so, why is the cable channel acting like Phil's anti-gay comments are a big surprise?
Plus, Adrienne Maloof is just like a teenager with parents out of town -- her huge party got shut down by cops! We know what went down inside, but here's a question: Why didn't any of her 'Housewives' cohorts show up? Adrienne joins us to explain why.
And, UFC badass Ronda Rousey gets in the ring with TMZ -- to answer questions about the sexualization of female fighters and her real-life beef with her next opponent Miesha Tate.

(0:00) "Duck Dynasty" star Phil Robertson is suspended indefinitely by A&E for his homophobic remarks -- and Harvey thinks it's a despicable move. He'll explain why.
(6:00) Two gay stars from A&E's "Storage Wars" join us to voice their opinion on Phil's comments and suspension.
(10:00) Justin Bieber's epic graffiti fail -- and how cops are on the lookout for his smoke-filled van.
(14:00) Shaunie O'Neal gets blocked out by Shaq when she tries to put their kids in a new reality show -- would you do the same if you were Shaq?
(18:00) Ronda Rousey in the house! She's joins to talk crap about her upcoming opponent Miesha Tate -- and to spar with Harvey and Charles on a number of topics ... including the sexualization of female fighters.
(24:00) Adrienne Maloof calls in to explain how her mega-party got partially shut down by the cops -- and why the other "Real Housewives" couldn't get in.
(29:00) Paul Walker's shop is closing its doors after his death -- and we debunk a rumor about the investigation into the crash the killed him.
(32:00) Rapper Schoolboy Q says weed makes him a better dad -- which ignites one of the most ridiculous arguments we've ever had.
(36:00) The floor is yours!
(41:00) It's time again for Tim's rejected pitches of the week!