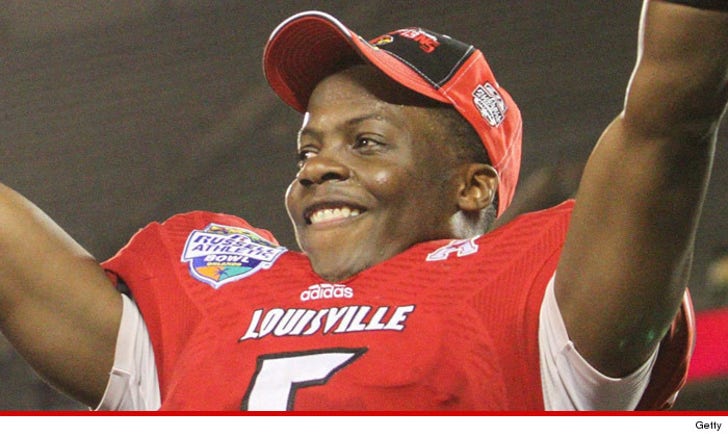 The race to sign Teddy Bridgewater IS ON ... with dozens of agents so desperate to get in touch with the NFL prospect, they're hammering his MOTHER with phone calls -- and it's starting to piss her off.

TMZ Sports spoke with Teddy's mom, Rose, who tells us ... ever since the Louisvlle QB announced his plans to leave college and head to the NFL this week, her phone's been ringing off the hook.

"I ask them, 'What do you expect me to do? Call my son and tell him to sign with you?'"

For the record, Teddy is projected to be a high 1st round pick ... so it's no shock that every agency in town wants a piece of the 21-year-old phenom.

Rose says Teddy has not picked an agent yet ... but it's not going to be a knee-jerk decision -- he's going to put a lot of thought into who he selects.

When we asked Rose if she's excited about her son's impending NFL payday, she gave us one of the greatest answers we've ever heard -- "That's money he earned. I've never touched a football. I've never been tackled. I just want him to be a productive citizen."

Rose -- who raised Teddy and his 3 siblings by herself and then went on to battle breast cancer -- tells us she's incredibly proud of her son and can't wait to watch him play in the NFL.

Rose also says she's not rooting for one particular team to pick Teddy ... but she does hope he goes to a city with warm weather.

Hey, she's from Miami after all.