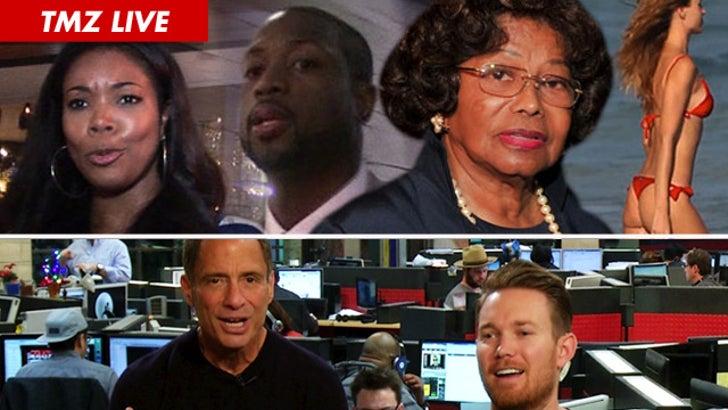 Gabrielle Union and Dwyane Wade claim they were on a break when he knocked up another woman -- but we've uncovered evidence showing that isn't the case. What's the real story?
Plus, Katherine Jackson's crowdsourcing website for their proposed Michael Jackson documentary mysteriously disappears -- so where'd the money go?
And, the first great butt debate of 2014 -- Italian model Olga Clarke's flat butt raises eyebrows ... good and bad. Which side of the round vs flat butt issue are you on?

(0:00) Dwyane Wade's claim that he and Gabrielle Union were on a break when he impregnated another woman is a load of rubbish -- judging by Gab's revealing Twitter account.
(6:00) Italian model Olga Clarke's flat butt ignites a major butt-controversy in the newsroom.
(10:00) Beyonce has done it now -- even NASA is speaking out against her using the Challenger audio in her song.
(15:00) Tori Spelling and Dean McDermott's cheating scandal -- the real deal ... or just the perfect publicity stunt.
(18:00) Maria Di Angeles -- who plays a prostitute in "Wolf of Wall Street" -- joins us to explain her very revealing, very naked auditioning process.
(22:00) Ludacris makes a money play when it comes to his new baby -- he told the court he only makes $25k a month to keep his child support down. You believe him?
(27:00) Katherine Jackson's crowdsourcing website disappears -- so where did the money go?
(32:00) Johnny Depp's cigarette butt -- how much would you pay for it?
(34:00) "Teen Mom' Maci Bookout ditches her kid for a booze fueled New Years celebration -- and some people think she should've hung up her party hat when she popped out the kid.
(36:00) The floor is yours!
(41:00) It's time again for Tim's rejected pitches of the week!