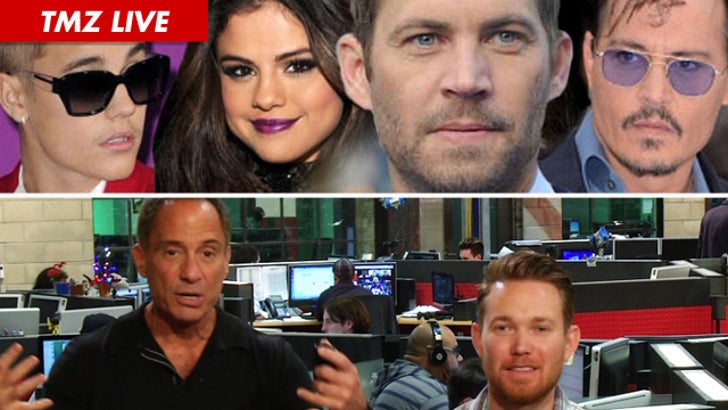 Selena Gomez ruled out ever getting back with Justin Bieber -- but their Segway may prove otherwise. Is he really the right guy for her?
Plus, Paul Walker's coroner's report shed light on his final moments -- we'll tell you what ultimately caused his tragic death.
And, Johnny Depp's cigarette butt -- Rick Harrison from "Pawn Stars" joins us to take a pass at its worth ... and our camera guy gives an update on its fate.

(0:00) Justin Bieber and Selena Gomez reunite -- is it the real deal ... and he really what she needs?
(6:00) The Paul Walker coroner's report has been released -- and shed light on his tragic last moments.
(10:00) One Direction new song sounds a lot like "Pour Some Sugar on Me" -- take a listen as judge for yourself.
(14:00) Macklemore walks around town with a Louis Vuitton bag -- does that make the "Thrift Shop" singer a sellout?
(18:00) Kevin Smith joins us to talk about a script he's working on that's causing a lot of controversy.
(24:00) A new documentary called "Act of Killing" is about warlords who agree to reenact their crimes with actors -- and it has really ticked off the Indonesians who's history it's about.
(29:00) Bethenny Frankel's new BF fights back after his past is picked apart due to his sudden fame.
(32:00) Johnny Depp's cigarette butt -- Rick Harrison joins us to give a price on it ... and our camera guy who found it joins us to explain its fate.
(36:00) The floor is yours!
(41:00) DMX's pre-show prayer in Detroit -- quite a shocking mouthful!