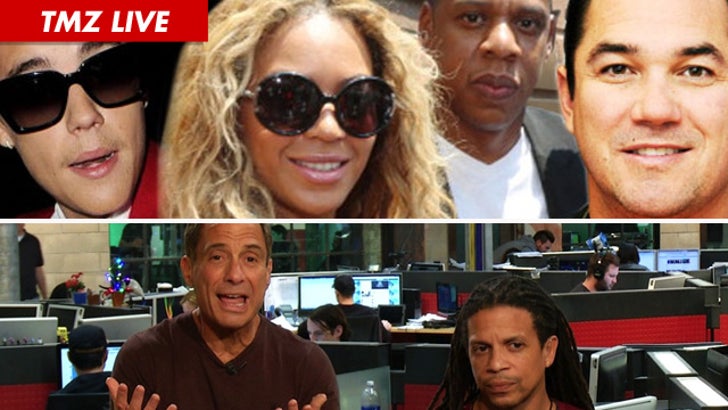 Justin Bieber just cranked up the war with his neighbors by blasting a house with a couple dozen eggs. Cops showed up and now they're investigating. After the speeding, spitting, and parties ... is this the incident that finally seals Justin's fate in Calabasas?
Plus, Beyonce and Jay Z gave Blue Ivy a ridiculously lavish and expensive SECOND birthday gift! Way too much ... considering she won't remember one minute of it -- or just expected when your parents are moguls?
And, Dean Cain is on the hunt for Bigfoot -- he joins us to explain his new show ... and he almost spots one of the mysterious creatures in our very own newsroom.

(0:00) Justin Bieber -- should he be prosecuted for egging his neighbor's house?
(10:00) President Obama sneaks in for a lunch in D.C. -- we talk to the manager of the restaurant to see how he did it so quietly.
(18:00) Dean Cain joins us to talk about his new show about hunting for Bigfoot.
(24:00) Jay Z and Beyonce rent out a theme park for their 2-year-old daughter's birthday. Too much for such a young kid ... or can they spend their millions however they want?
(29:00) Arnold Schwarzenegger and Maria Schriver's divorce -- why it's taking so long. Hint: $200 million on the line.
(32:00) Two rappers who shot a music video in North Korea join us to talk about the crazy risk they took. (34:00) Gabrielle Union says Dwyane Wade's baby is HER fault.
(36:00) The floor is yours!
(41:00) Paula Abdul sues over a tanning bed incident she claims gave her second degree burns.