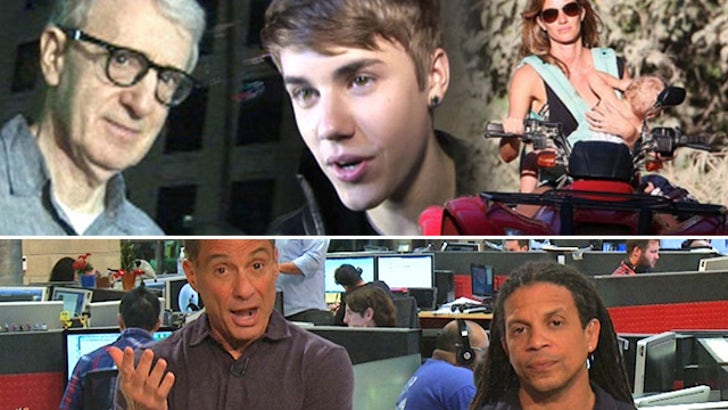 The Golden Globes made Woody Allen look like a hero last night -- but his own son, Ronan Farrow is blasting the award show for forgetting about Woody's dark side: allegations he molested his adopted daughter. Agree with Ronan, or is he dredging up unproven dirt?
Plus, turns out Justin Bieber did $20K worth of damage when he egged his neighbor's house ... which would make it a felony. The D.A.'s office is fed up -- is it finally time for Bieber to do some time?
And, Gisele Bundchen takes her young kid for a ride -- on a four-wheeler with no helmets. Should we be outraged ... or just calm down?

(0:00) Woody Allen's son calls him a molester the night the Golden Globes praise him. Did he go too far?
(6:00) Justin Bieber did $20,000 worth of damage to his neighbors house with eggs -- is it time to drop the hammer on him?
(10:00) Gisele takes her kid on a four-wheeler with no helmets in sight -- terrible mom ... or terrible to criticize her?
(15:00) Tori Spelling ditches her dog after having kids.
(18:00) The girl Jay Z brought on stage joins us to reveal if the rapper is interested in her on a pro level.
(24:00) Whitney Houston's daughter is officially married to her pseudo-brother! Congrats?
(29:00) The craziest lawsuit ever -- involving Jennifer Lopez and a random man's nude photos.
(32:00) "Survivor" star gets a DUI -- and then takes it to a whole new terrible level.
(36:00) The floor is yours!
(41:00) "Real Housewives" star Jill Zarin joins us after catching hell for taking carry out at an expensive restaurant.