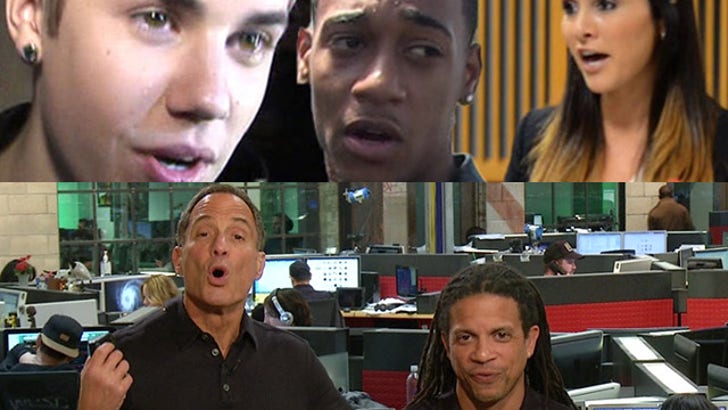 Justin Bieber's dodged an arrest -- for now -- when cops raided his home ... meanwhile, his pal Lil Za got busted TWICE yesterday. Is Za taking the fall for JB, and if so ... will Justin be grateful?
Plus, an eyewitness says Kanye West beat the absolute crap out of the guy who allegedly said the n-word in front of Kim Kardashian -- but an unforeseen factor could help him beat the rap.
And, Michelle Obama shocks the world by coming out as pro-plastic surgery -- does this totally undermine her campaign for a healthy lifestyle?

(0:00) Did Lil Za take a bullet for Justin Bieber by claiming the drugs were his?
(6:00) A former "Bachelor" contestant played dumb on the show -- but she's a real-life powerhouse attorney in real-life.
(10:00) Kanye West -- an eyewitness claims he beat the crap out of the guy who hurled the n-word in front of Kim. Can he be prosecuted?
(14:00) Michelle Obama is pro-plastic surgery -- is she sending the wrong message to the world?
(18:00) Former "Teen Mom" Alex Sekella joins us to explain why she thinks the show does the opposite of glamorizing teen pregnancy.
(24:00) A cast member on "Black Ink Crew" says someone on the show drugged her -- we're joined by another cast member Caesar ... who says she's just slut who's full of crap.
(29:00) Ciara's husband Future has laid down the law on his tour now that she's pregnant.
(32:00) The shocking photos we posted of Marines allegedly burning bodies of fallen enemies -- should the soldiers be punished if it's true?
(36:00) The floor is yours!
(41:00) Harvey and Charles beware ... it's time again to read your hate mail!