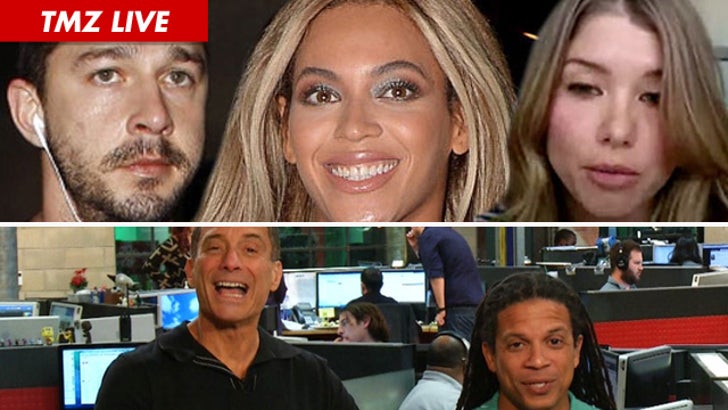 We broke the story ... video of Shia LaBeouf head-butting a dude in a London pub -- all over someone shooting video of him and his GF. He's done it before ... is this just a major overreaction Or just majorly drunk?
Plus, Beyonce's Insta-tribute to the late Aaliyah has gone viral ... because a lot of people think it also looks like a big diss to Kelly Rowland. Did Bey intentionally leave KR on the cutting room floor?
And, former Playboy Playmate Teri Harrison joins us to talk about the death of fellow Playmate Cassandra Lynn Hensley -- and reveals shocking details about the pitfalls life inside the Playboy mansion.

(0:00) Beyonce's tribute to Aliyah draws fire when she cuts Kelly Rowland out of the photo.
(5:00) Shia LeBeouf gets into another bar fight -- does this guy finally need to get help with his anger issues.
(10:00) Ice Cube says NWA was the right name for the group -- but would it fly nowadays?
(15:00) Justin Bieber is gonna let Lil Za stay at his place -- despite the arrest for drugs.
(18:00) Former Playmate Teri Harrison joins us -- and gives an incredibly honest look at the negative side of being associated with Playboy.
(24:00) Lindsay Lohan is back in the lion's den -- get paid to make appearances at bars.
(29:00) Octomom's welfare fraud heads to court -- but all Gary can think about is how hot she looked in her court attire.
(32:00) A new song called "White People Crazy" is it racist? We talk the masked man behind it ... a rapper called Rawkus.
(36:00) The floor is yours!
(41:00) The disabled kid behind those crazy "Walking Dead" zombie pranks gets a chance to scare one of the stars of the show!