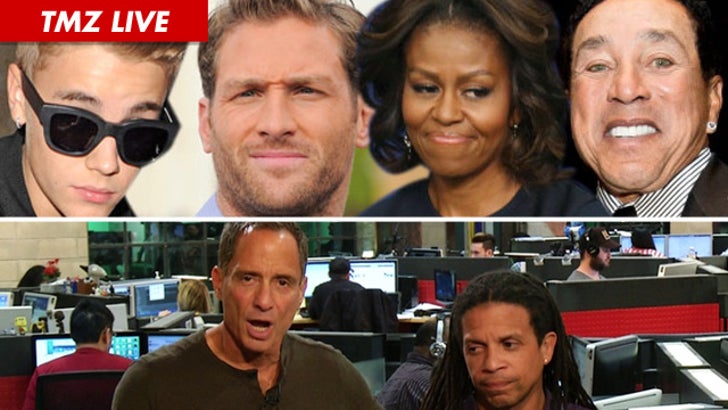 Justin Bieber has a serious problem with prescription drugs like sizzurp (Codeine cough syrup) and Xanax -- and cops found a ton of narcotics in his house. Is it time for rehab?
Plus, "The Bachelor" Juan Pablo Galavis' comment about a possible gay bachelor blew up in his face -- but will it hurt him with the ladies? Two of his former "Bachelor" pals join us -- but only one defends him.
And, Michelle Obama's star-studded 50th birthday bash -- we get the inside scoop from one of the guests (and one of the greatest singers of all-time) Smokey Robinson!

(0:00) Justin Bieber has a drug problem -- we'll tell you what drugs ... and how bad it is.
(5:00) "The Bachelor" star Juan Pablo Galavis says gays are too perverted to be on his show ... then backtracks with a bizarre statement.
(10:00) Trace Adkins -- we now how photos of the confrontation he had with his impersonator ... and there's something clearly missing in the photos.
(18:00) Smokey Robinson joins us to say what it was like being at Michelle Obama's birthday party.
(24:00) Madonna uses the n-word (with an a) in an Instagram post about her son. Is this another desperate cry for attention?
(29:00) Tatyana Ali joins us to explain why she's backing Obamacare -- and whether or not her high school friends (the Kardashians) could help the cause.
(32:00) Martin Luther King III joins us after his father's image was used to promote a twerking party ... and to reveal if his dad would've been a Tupac fan.
(36:00) The floor is yours!
(41:00) Brad Pitt's new haircut -- we got him out ... and he actually talked about it!