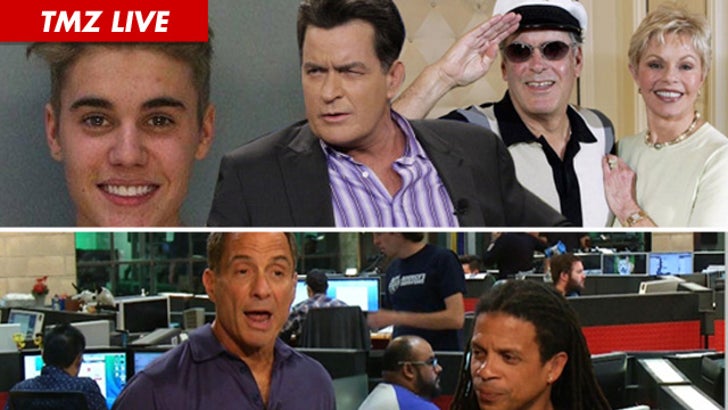 Justin Bieber's out of control spiral finally landed him in handcuffs -- busted for DUI and drag racing in Miami. We have every detail on what he was doing, who was with him ... and what's next?
Plus, Charlie Sheen goes on a rant about President Obama and school shootings. He's a got a plan ... and he's taking it straight to the White House!
And, it's the divorce no one ever saw coming -- Captain and Tennille are calling it quits ... and it's really bumming out one person in particular.

(0:00) Justin Bieber busted for DUI -- we have all the details ... including the charges, how his dad was involved, his ridiculous court appearance, and we talk to an eyewitness to the arrest!
(10:00) Justin Bieber's hot model friend .. and her NFL connection.
(14:00) Harvey is crushed ... Captain and Tennille's divorce ... but there's something fishy about it. (18:00) Charlie Sheen joins us to rip into President Obama for partying with celebs instead of solving school shootings.
(24:00) Another magazine whitewashes a Black actress -- this time it's "12 years of a Slave" star Lupita Nyong'o?
(29:00) Dean McDermott can't catch a break -- he's now being sued over a cookbook ... we'll explain.
(32:00) Voice actress EG Daily -- who's done voices for The Powerpuff Girls, Rugrats, and Babe -- joins us to about how awesome her gig is ... and do a few of her famous voices.
(36:00) The floor is yours!
(41:00) It's time for Tim's rejected pitches of the week!