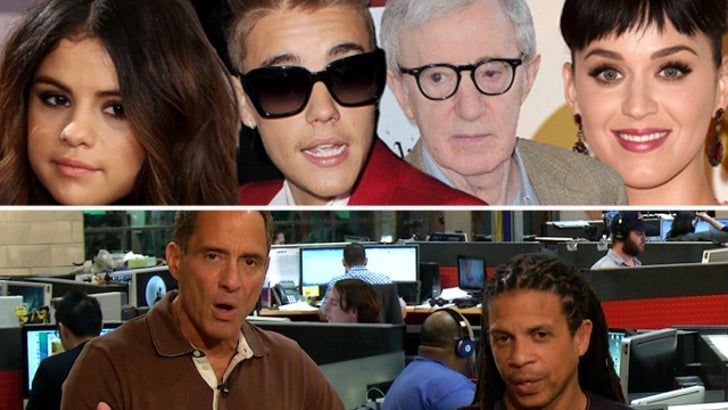 Selena Gomez did a stint in rehab -- not just for abusing pills, marijuana, and booze ... but for addiction to ... JUSTIN BIEBER??
Plus, new context on the Woody Allen-Mia Farrow war. Do Woody's own words back in 1976 about being in bed with twelve year olds ... make you think he did it -- or was he just making a joke? We're talking with one of his exes ... an actress who was 17 when they dated.
And, Katy Perry and John Mayer hit up a strip club -- and Katy joins in on the fun. We'll tell you why the strippers weren't the only ones who deserved to take home money.

(0:00) Selena Gomez checks into rehab -- and our sources say Justin Bieber is partly to blame.
(6:00) Woody Allen's comment about an orgy with 12-year-olds -- we talk to one of his exes who thinks it's much ado about nothing ... and blames Mia Farrow for brainwashing Dylan into thinking she was molested by Woody.
(10:00) Alleged drug dealers connected to Philip Seymour Hoffman's death were arrested -- and shed light on his deadly fight against heroin addiction.
(15:00) An unbelievable weight loss on "Biggest Loser" -- is it healthy to lose that much that fast?
(18:00) Meat Loaf is going back on tour -- despite an Asthma problem that causes him to pass out all the time ... he joins us to explain why he's not worried about it.
(24:00) Katy Perry and John Mayer's strip club trip -- we'll tell you how Katy made it a trip the strippers will never forget.
(29:00) Paul Walker's will -- we'll tell you why there's a big problem with it involving the custody of his daughter.
(32:00) George Zimmerman -- ready to fight DMX.
(36:00) The floor is yours!
(41:00) Hate mail time!