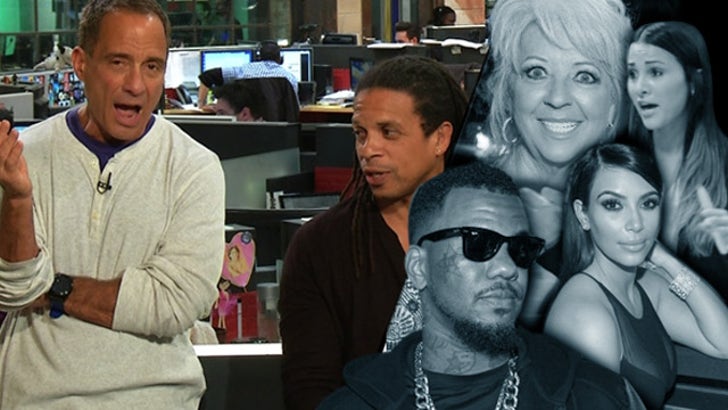 The Game dropped a Kardashian bombshell while responding to rumors he's banging Khloe -- he revealed it's actually Kim Kardashian he used to date! So, why's he blabbing about it now? And does Kanye West know?
Plus, Andi Dorfman from "The Bachelor" suddenly vanishes from her day job -- an assistant D.A. in Georgia -- and there can only be one reason, right? Meet your new "Bachelorette."
And, Paula Deen compares her struggle to that of Michael Sam -- the openly gay, African American NFL prospect. Will she ever learn to just leave race out of it?

(0:00) The Game reveals he's not banging Khloe Kardashian -- but he used to date Kim.
(6:00) Former "Bachelor" contestant Andi Dorfman is MIA from her job -- so if you put two and two together ... she's gonna be the next "Bachlorette."
(10:00) Paula Patton surfaces after her split with Robin Thicke -- smiling and ring-less.
(18:00) 2 Chainz's gravity defying strippers join us to explain how they do the craziest stripper move we've ever seen.
(24:00) Justin Bieber -- why is he doing pushups in jail?
(32:00) Joanna Krupa -- not impressed by the Dalai Lama.
(32:00) There are some new Housewives on the block -- from Nashville. They join us to explain how they're different from all the rest.
(36:00) The floor is yours!
(41:00) It's time again for Tim's rejected pitches of the week!