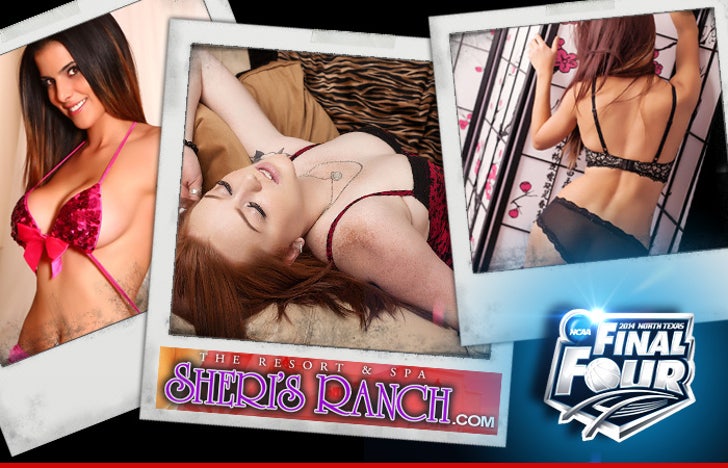 March Madness isn't just great for Las Vegas casinos ... it's also HUGE for the ho business ... with one Vegas-area brothel telling TMZ Sports sales have been BOOMING since the first tip-off.

We spoke with a rep for Sherry's Ranch in Pahrump, NV ... who tells us the hotel connected to the brothel is filling up almost as fast as the women on staff!

FYI -- March Madness is the biggest event in Vegas, bringing more people to Sin City than the Super Bowl ... and it seems EVERYONE benefits.

"Judging from the brothel hotel bookings we have so far, we expect to see at least a 50% revenue increase this weekend and we expect to do very well for the remainder of March Madness" ... the rep tells us.

We also spoke with a bunch of the staffers at the ranch who tell us they're breaking out some basketball-themed specials for the sports fanatics in town.

"There I’m going to shackle him to our forced orgasm chair and, by the time I’m done with him, he’ll forget all about basketball ... he might even forget his own name."

Mandi Love tells us ... last March Madness she banged a frat boy in the backside with a John Holmes-style strap-on and is hoping to repeat in 2014.