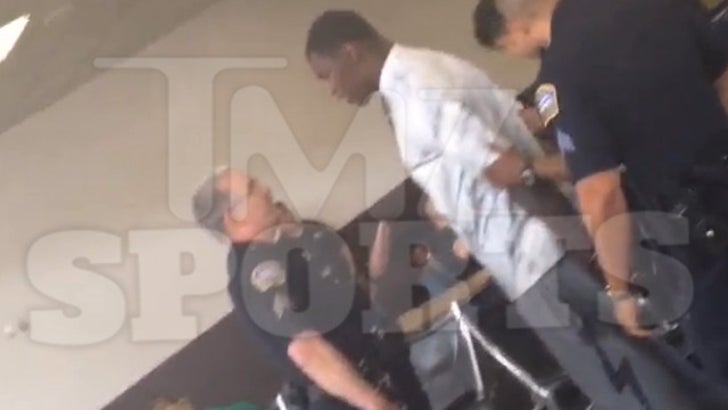 If convicted, Smith faces up to one year behind bars.

-- Multiple law enforcement sources tell TMZ Sports ... Aldon appeared to be drunk at the time of the incident.

Law enforcement says the drama began at the security gate -- when he was randomly selected for a secondary screening.

Cops say Smith became "belligerent and uncooperative with the process and with the TSA agent making a comment indicating that he was in possession of a bomb before proceeding toward the gate area."

TMZ Sports obtained video showing Smith in handcuffs ... telling police he did nothing wrong. He also says they're going to be "embarrassed."

Cops say Smith was uncooperative during the arrest. He was eventually transported to a nearby LAPD station to be booked.

Smith has a long history with the law -- the 24-year-old defensive end was arrested in 2012 for DUI and in 2013, he was charged with 3 counts of illegal possession of an assault weapon stemming from a violent incident at his home in San Joe, Ca where Smith was stabbed.

It's just another problem for the 49ers -- a team that's already dealing with the investigation involving QB Colin Kaepernick in Florida.

"As this is a pending legal matter and we are still gathering the pertinent facts, we will have no further comment."