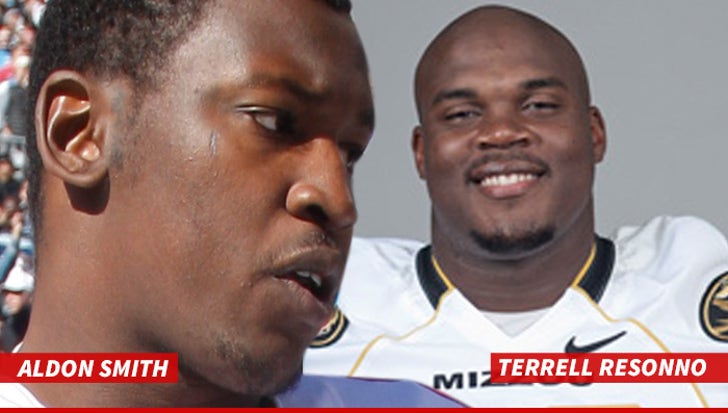 He may be having some personal issues, but Aldon Smith is NOT A VILLAIN ... so say several ex-college teammates who tell TMZ Sports the Aldon they knew at Missouri was a stand-up guy.

Aldon's been under fire ever since he was arrested at LAX yesterday for allegedly making a false report of a bomb threat ... but it's clear, his ex-teammates from Mizzou still have his back.

One of Aldon's supporters is former defensive tackle Terrell Resonno -- who roomed with Aldon for a year back at MU.

"In college, he was great. He was accountable on the field and off. I still think he's a good dude."

Terrell says he's "confused" by Aldon's behavior over the past couple of years ... explaining, "He must be having personal issues because the real Aldon wouldn't do that."

We also spoke with former Mizzou linebacker Donovan Bonner who said, "[Aldon's] a great dude. He looked after me when I was a freshmen."

A third teammate, who didn't want to be named, echoed the sentiments ... saying he believes Aldon, while seemingly troubled at the moment, is a good person deep down.

We asked Terrell if he had a message for Aldon ... and he told us, "I'd tell him, 'keep your head in the game.' A lot of people still look up to you. Represent the University of Missouri."