Sean "Diddy" Combs gave a rousing speech to the graduating class at Howard University today, and while the speech had its moments … it sure seemed to be an awful lot about how it was HIS day … more than theirs.

Diddy's speech didn't seem too scripted and went on for quite a while. He talked a lot about running the New York City Marathon in 2003 after only eight weeks of training.

He also quoted Biggie several times and hashtagged his own speech midway through.

But congrats to the graduating class of 2014. 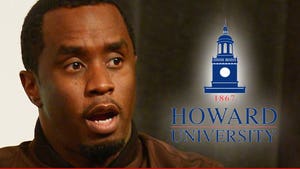