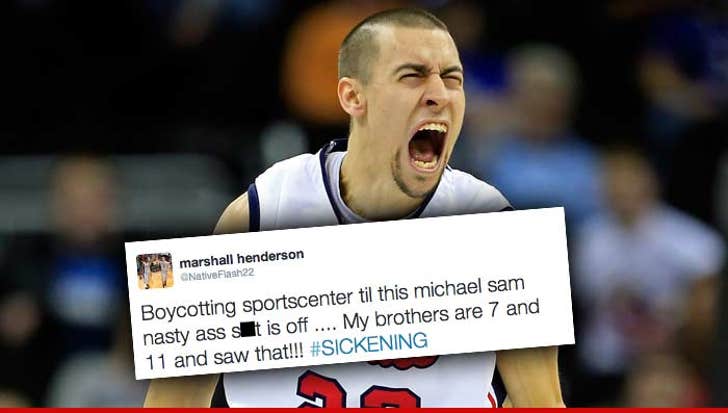 8:13 AM PT -- Henderson is backtracking BIG TIME ... claiming his homophobic tweet was part of a twisted psychology experiment to see how the public would react. Suuuure.

Henderson wrote, "One of my best friends, WHO IS GAY, is about to graduate in psychology, asked me to say these things so he can have responses."

"The point of his study was to see how people react when others say things or act a certain way against another group of people."

He added, "Sorry for messing with everyone like that!!! Everyone really helped my boy AND FOR THAT WE ARE EXTREMELY APPRECIATIVE!!!"

Meantime, Ole' Miss is already distancing itself from Henderson -- with Athletic Director Ross Bjork telling us, "I am extremely disappointed and we do not condone the statements made by our former bball player. We believe in respect and dignity for all."

"We use significant resources to educate our student-athletes about respect and dignity for all people and unfortunately not everyone gets it."

The man behind the homophobia is Marshall Henderson -- who became famous at Ole' Miss for his outrageous on-the-court antics ... including taunting opposing players, fans and coaches.

Now, he's going after Sam -- tweeting, "Boycotting sportscenter til this michael sam nasty ass sh*t is off. My brothers are 7 and 11 and saw that!!! #SICKENING."

Henderson's comments come one day after the Miami Dolphins fined safety Don Jones for tweeting "OMG" and "horrible" when ESPN aired the footage of Sam kissing his BF.

As for Henderson ... he was NOT expected to be selected in the upcoming NBA Draft -- and we're guessing these comments aren't going to help his stock.